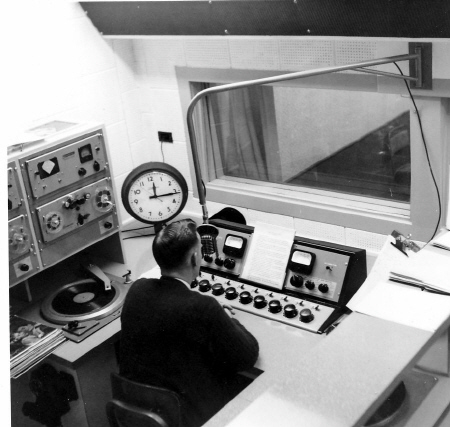 Richmond.  This building housed WX's first 50 kW plant, which was a

water-cooled Continental 317.  Only three of this model were ever made!

(As mentioned earlier, at this time 50 kW installation was a huge

took more than a year.)  This plant provided primary service for WX from

Knight St. still jogs off to the east as you approach Jacombs going

away from a collision course with Knight!).  Beautiful art deco design.

Next two pix are of Trial Island, just south of Victoria, in the very

kHz (timeshare with KGO!), with a 1 kW transmitter located near UVic, to

they would upgrade to 10 kW, and all three towers would have to be

relocated (and a fourth added).

View from the tx site north is of Gonzales Bay, just outside Victoria,

circa 1961.  A rather alarming lack of development!

Next four pix are of CKPG radio, 1961 or so.  New console installation.

Sorry I don't know the name of the announcer, but he looks like a pro,

doesn't he?  Old-timers will recognize the huge Gray tone arms and the