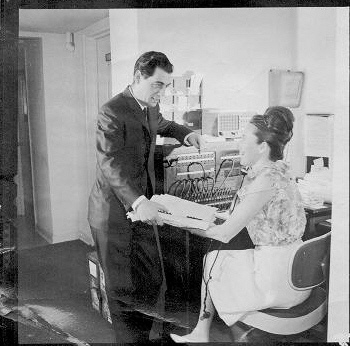 A series of pictures and articles of

Including some memorabilia on his death

i. Burns with girl trainee

I was involved in Vancouver Radio at an exciting and turbulent time in The Sixties.

I got a job at CJOR.  In those days, The Station was in the basement of the Grosvenor Hotel on .

his Open Line Show. I manned the switchboard, took the insults, traced VIP’s

for Pat and attempted  to keep his  adoring fans at bay.

It was frantic stuff. Some of the highlights, during that period -  I tracked down Dr. Martin Luther King to a jail in Selma, Alabama and he spoke 'live'  to Pat about Civil Rights.  Contacted Senator Robert Kennedy, then Attorney-General, and he gave Pat a lengthy interview; I also remember Pat's interview with

And  there were many, many  others.

After a time, Pat began to think his talk back show had the kiss of death because King, Kennedy and James Lincoln Rockwell (Leader of US Nazi Party) were all assassinated after their interviews and Jack Ruby died of cancer.

Pat was one of the most unforgettable people I have ever met, or will ever, meet.

The first time I saw him, he was emerging from a service tunnel which ran behind the studios at CJOR.  (This was a way of avoiding the people who gathered to bug him after he came off air.)  He was covered in cobwebs and his first words to me where "Friggin place"!

(That was not the word used)

As time went by, the ratings soared, the sponsors begged for air time, Peter Kosick and Marie Chandler suspected that they'd created a monster and The Board of Broadcast Governors and some politicians began getting nervous.  Then, as you know, it all ended in tears.

I still have the original Sun ( Times actually) front page with coverage of Pat’s rally at The Queen Elizabeth Theatre.  "I will return" he yelled, in the headlines.  He didn't and the rest, as they say, is history.

Now he has finally found peace.