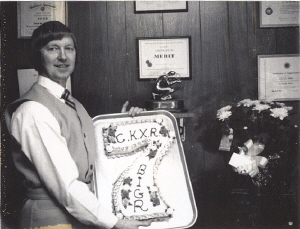 The two stations became known as “The Big R Network”. Salmon Arm and Revelstoke were small communities. Individually, neither one was really big enough for a radio station, but combined, they made a worthwhile radio market.

On May 16, CKCR was given approval to establish studios at Revelstoke. It would broadcast some local programming in addition to programs received from CKXR.

On December 18, Robert J. Hall and J. Jeanne Hall were given permission to acquire 64% of the shares of Hall-Gray Broadcasting Co. Ltd. from 14 shareholders.