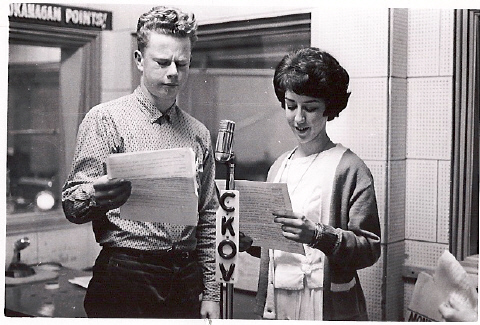 02. John Tanner – young days in radio at CKOV - thanks to Mike Cleaver

03. CKOV folder – for presentations – thanks to Paul Hesketh

04. Dick Diespecker comes to during WW2

CKOV is ’s oldest radio station. From small beginnings in 1912, George Dunn operated an amateur transmitter. Later, in 1920 he was given the call letters 10-AY. It was James Bromley-Browne who saw the future and potential of radio. In 1931 he took over 10-AY lifting it to professional standards with the call letters CKOV.

Having experimented with Church Service broadcasts and musical programs on a friend's Ham station, James W. B. Browne decided to start a commercial radio station. He used his own money to get it going and then "sold shares" for $2.00 each. At one of his license renewal hearings years later, he was told by the regulator to "clean up" the ownership of the station. It took him several years, and even then, they could not find some of the people who had "donated" to the resources of CKOV.

The station was in the Browne family for over fifty years before it was sold to Seacoast Communications Group in the late 1980s.