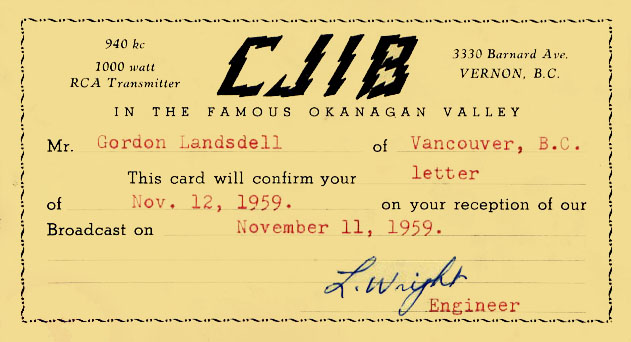 1947
The Schroter brothers of Vernon founded CJIB. The station began broadcasting in September, on 940 kHz with a power of 1,000 watts.

1989
On September 28, the CRTC approved the purchase of Selkirk Communications Ltd. by Maclean-Hunter Ltd. A number of Selkirk’s properties were then sold to Rogers Broadcasting Ltd. CJIB was among the stations acquired by Rogers.

On November 15, CJIB made the move to FM, as “Kiss-FM, Today’s Best Music”. CJIB became Vernon’s first ever FM station.

2003
In January the official call letters were changed CKIZ-FM.

2005
On February 25 the CRTC approved application by Rogers Broadcasting to add a 10-watt transmitter at Enderby at 93.9 MHz to rebroadcast the programming of CKIZ-FM, which was no longer receivable there after its conversion from the AM band.