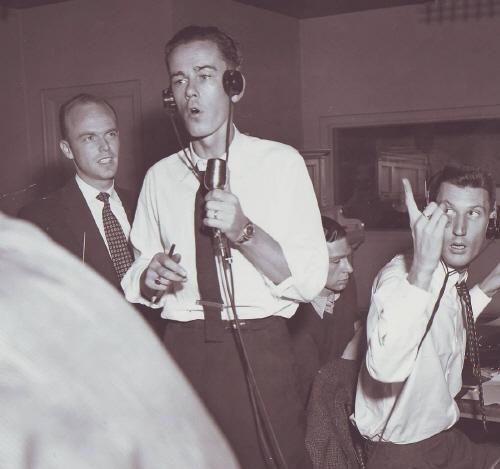 Jim Cox - a play-by-play pioneer in BC Sports

In 1944, Bill Rea opened a new radio station in the Royal City and during the summer invited teenagers to watch the proceedings. Jim Cox was one of that crowd. Three weeks after CKNW went on the air, Jim, at the age of 16 was hired as an announcer.

Jim Cox was a school-boy friend of me and a few others - Gord Young (Dr. Gordon Young, dentist in Whalley) and Ken Wolstencroft (Wolstencroft Agencies) and so on.

Before he went to CKNW he had a simulated radio station set-up in his basement and he and I spent hours with newspapers and 78 rpm records pretending we were announcing and dj’ing. But Jim clearly had the talent and the genius for ad-libbing which was to stand him in good stead for his future.  I attended with him one day at the studio but it was clear that Jim had the gift, not me. I went on to spend 25 years in the RCAF after graduating RMC on a cadetship from the ranks.

Jim’s first job with CKNW was sitting in the Lulu Island transmitter site, standing by with records in case the link from the studio failed. I attended with him a couple of nights around midnight but got hell from my parents who thought (and they were right) that my studies were more important.

My brother Norm, now deceased, lived next door to Jim and his wife in what was called Victory Heights in New Westminster (circa 1955-65). Sometimes when I was home on leave I would chat a bit with Jim when I was visiting my brother.

Just before he died, Jim passed to Norm, of all things, a bible which indeed was mine. Inside there was an inscription awarding it to me from the old Grace Sunday School at the corner of 7th Avenue and First Street.  I have no idea in the world how it came in his hands but it certainly was furthest from my mind then and now. (Sunday school was a torture) But it was an indication of thoughtfulness and kindness on Jim’s part. I suspect at that time he knew he was dying and was “tidying up”.

Maurice A. Rhodes Nelson BC

Radio at the time was an evening entertainment source and he contracted to start the programming at 6 o’clock before school. After classes he was back at it doing the High School Jamboree show until 5 pm. If anyone could string a guitar and play three chords Jim Cox said, we’d put it on the air. All that work for $13.85 a week.

The original location of the station was the 2nd floor of the Windsor Hotel at 732 Columbia Street, New Westminster above the well known Fraser Café. A year later, Jim left Duke of Connaught high school and took up this thrill of a lifetime. I had always been a radio nut, listened from the time I was seven, Cox was quoted as saying.

Jim’s long association with sports started in the mid 40’s as a statistician and between-periods interviewer for lacrosse broadcasts, the most popular sport in the Lower Mainland. When the regular broadcaster Leo Nicholson died, Jim was recruited to do play-by-play for the New Westminster Salmonbellies. In those days sports broadcasts not only made money, but it met the requirement of providing a prescribed number of hours of live programming. When the Pacific Coast Hockey League and, later, the Western Hockey League were formed, Jim did broadcasts of both the New Westminster Royals and the Vancouver Canucks home games.

Between 1945 and 1956 CKNW did play-by-play of 14 different sports, broadcasting everything from stock car racing to weight lifting. Jim Cox was appointed as the stations news editor and sports director in 1953 at the age of 25.

The next year the station covered the British Empire Games with Jim handling the bulk of the work. His call of the Roger Bannister-John Landy miracle mile was a career highlight. During all of this, Jim married station receptionist Louise North of Maple Ridge and welcomed children Keith, Colin and Cheryl into his home. He was active in his community with the New West Concert Band society and the Hyack Anvil Battery.

For thirty years Cox handled the microphone for all BC Lions football games. He was the voice of the Lions. Jim retired in 1989. He was inducted into the Football, Lacrosse, and BC Sport halls of Fame.

In the garden of Saint Mary’s Hospital is a gazebo dedicated to Jim who died of cancer. The memorial structure was built as a legacy with funds from the city of New Westminster and from the 1997 BC Senior Games. He is buried in the Fraser Cemetery with a symbolic “microphone” on his gravestone.