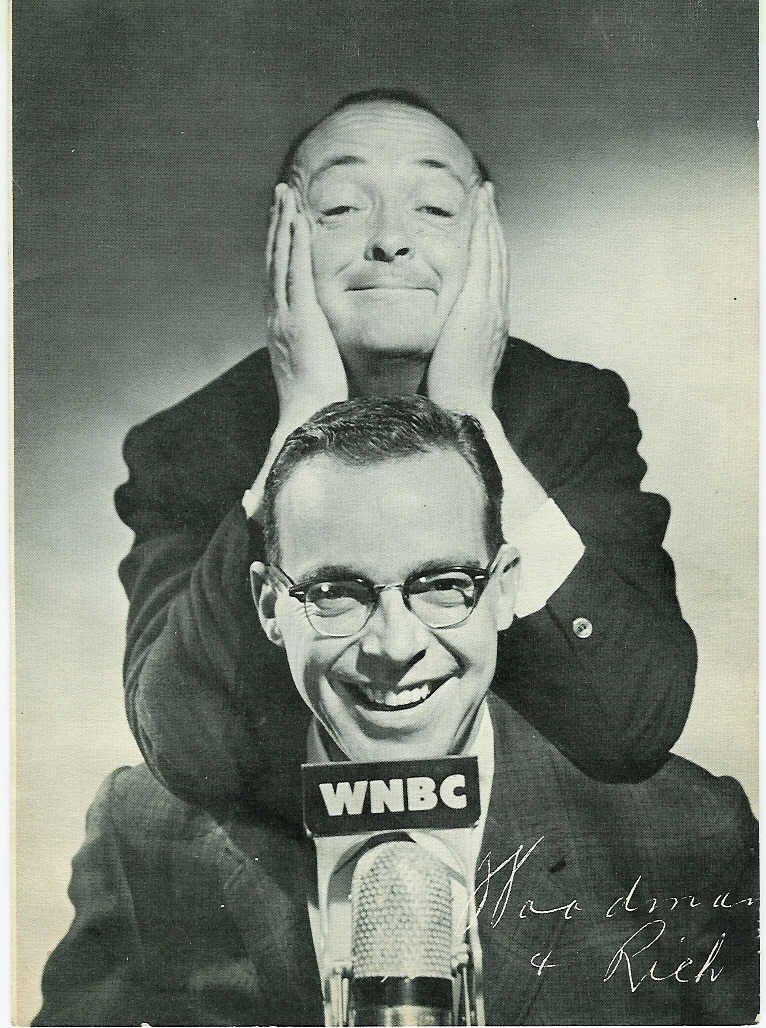 with Keith Rich – Quite a Team

Thanks to Carol Woodman wife of the late Steve Woodman for most of the the pictures and information displayed on this page and the Woodman Family Pix Page.

“Re-read your bio on Steve. It was great and has made a big difference in my daughter Mimi's life as she loved her dad very much. I would also mention that Steve was the first Ronald McDonald in LA.  This was in the 60's when hamburgers were 10 cents and milk shakes were a nickel more. He opened McDonalds drive-ins and also some toy stores.  We had 3 clown outfits at home in Malibu so two were always clean.  Thanks for this Jack.”  - December 11, 2009

The fondly remembered Saskatoon-born Steve Woodman, 44, entertainer and broadcaster, moved to Vancouver in 1971. Among his many gigs, he hosted CKWX's Steve's Place and Vancouver Variety Club telethons. He was also an original cast member of the zany radio show Dr. Bundolo's Pandemonium Medicine Show, recorded live at UBC's student union building. A man of 1,000 voices. After a 1974 telethon, a car accident on black ice nearly took his life and ended his career.

Steve Woodman, a veteran radio and television personality described as "a living performance," died in his sleep. He was 62. Woodman was known across Canada as Dr. Bundolo on the popular CBC radio comedy program of the same name. In Vancouver, he was well known as the afternoon host on radio station CKWX.

Gene Kern, a longtime friend and colleague of Woodman at WX in the 1970s, said his original satires and voice impressions were outstanding. "He was the most memorable and talented performer I ever worked with," Kern recalled. "The guy was a living performance, and was 10 or 15 years ahead of his time." In the early days of his career in the 1960's, comedian Rich Little contacted Woodman at a Montreal radio station to get advice on doing impressions, said Kern. Among Woodman's funniest routines, he said, was a continuing character he voiced on his radio program named Miss Juggs, the station coffee girl.  "Sometimes he would scold her and she would burst into tears, lighting up the telephone switchboard with calls from listeners asking him to leave her alone.

Dr. Bundolo's producer, Don Kowalchuk, said Woodman's colleagues on the weekly program felt Woodman's voice impersonations were superior to those of Rich Little. The comedy program, taped before live audiences and broadcast across Canada, ran from 1972 to 1981. Woodman was involved with the show until 1974.

Woodman had also previously worked in Edmonton, Montreal, Toronto, New York and Los Angeles. He also managed rock and roll bands and played host to various children's TV shows. Woodman's career ended when he suffered a major head injury -- causing him to lose his speech -- in a 1974 car accident while he was driving home after a telethon. At that time, Woodman, was heading south in the early hours of the morning when he lost control of his car. Former Delta police chief George Angus remembers the accident well. "I recall that black ice caused the accident. It's a very steep bank. He rolled his car." Sports broadcaster, J. Paul McConnell who lived in the area at the time, recollects much the same. He said his talented friend, who was also an accomplished musician, never recovered. "He was in a coma for a long time," McConnell said.” His car just rolled down the bank." But a cassette tape of his friends was played again and again in the hospital "and one day he woke up." After a couple of major operations, Woodman was able to resume some activities such as golf.

Steve Woodman, started at CKUA in Edmonton, actually taught Robert Goulet how to be a disc jockey.

Became #1 in Montreal at CFCF...did a morning show in Toronto CKEY with Keith Rich.

Woodman and Rich subsequently did the after noon radio show on WNBC New York...starting the same day Johnny Carson did.

Then went to Los Angeles, where he did a couple of movies, some radio and TV and was the first Ronald MacDonald in Los Angeles, opening toy stores and MacDonald restaurants.

Carol Woodman who with Steve raised many children - including Jesse Dylan (Michael Woodman) and Rita Woodman- both who tried radio as careers.

There was Steve Woodman, a mischievous type. He was an announcer for both CJCA and CFRN, but he liked CKUA best of all. There, he could be announcer, disc jockey, singer, actor on school broadcasts, and, as will be described, pianist to his heart's content. One of his habits was to play a recording on the air of, say, Doris Day doing "Moonlight Bay", then sing along in duet. Voice characterization was another of Steve's accomplishments. But a favorite trick when doing a late-night show was to open a studio microphone from the control room, then get up and walk around to the studio, sit down, and play the piano. Of course, there was a lot of "dead air" while he walked to the studio, but listeners loved it.