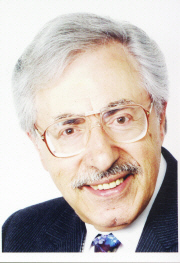 Born Wilfred Nicolas Ray at VGH December 21, 1926 and raised in West Vancouver, Wilf was first on the air in 1944 at CKMO. He was competing with Jack Cullen at CKNW and Vic Waters at CJOR.

Wilf Ray writes – “Radio Station CKMO, 1410 ON THE DIAL in the forties, was located on the 2nd Floor, in the Sprott-Shaw Building,  at the corner of Robson & Howe Streets.  I just about fell off the roof of the building laughing at Bill Pike who was handling the controls while I was doing my program called "The Parade of Hits" (Sort of a take off on the Lucky Strike Hit Parade from the U.S.)  We spun a record by Mel Blanc of the "Woody Woodpecker Song”, with Mel doing the contagious laughing on the record.  I had walked out on the roof, behind the control room, while the number was spinning, started to laugh, and imitating Blanc. When the record ended, Pike had started to voice a commercial on the air, heard my antics, and broke down in the middle of the ad copy laughing between words.  We both just about got fired, as the station manager, Kay Willis, was listening and called to give us hell. Radio in those days was a ball.”

Bill Rea, owner of the Top Dog station offered him twice the pay to work all night. He left CKMO but later called it a big mistake because ‘nights were a killer’. Wilf also admits Rea outfoxed everyone by taking away Cullen’s opposition. He did win a prize at CKMO; he married the music librarian, Marion McDonald. In 1950 Ray left radio for the real estate business.

1965 saw him hired by friend Jim Pattison who had bought himself a radio station. Ray joined Bernice Gerard on CJOR to do a gospel music show on Sundays. He continues that to this day with a Pattison radio station CKBD. Almost forty continuous years on the air.

But, the real history of Wilf Ray is his knack for promotion.

1. While at CKMO, Wilf made a horse and rider from two 16” records and put “Disky” on the roof of his 1946 Chevrolet and parked it downtown. The first person who called the station with the location won a box of Purdy’s chocolates.

2. Bow-Mac Sign – he and then general manager of Bowell-McLean, Jim Pattison came up with the idea of erecting a 100 foot sign to blow out the competitors on Broadway’s auto-row. You could see if for ten miles.

3. When Pattison’s empire got bigger, Ray joined Neonex as press man and public relations. He did such a good job he had a heart attack in 1980 and retired from that game but not life.

As Wilf approaches 8 decades on the planet, he has yet to retire, setting up a business with his daughters in the .

In radio Ray stands alone as the oldest disc jockey on the air. Red Robinson started on the air about a decade later and describes Wilf as a real character, which he is for sure.

I was born in the in 1926, grew up fondly in .  I can vividly still remember at the tender age of 7, traveling to Vancouver from Ambleside on one of the 3 ferries in operation then, the Bonabelle, No. 5 and the Sunrise. This of course was before the was officially opened in 1938.  I was at the ribbon-cutting ceremony as a young tyke.  The Sun 25 years later ran a picture of the event.  In the pictures were the dignitaries at the middle of the bridge including me.  If I had between 2 inches closer to the scissors used, they would have circumcised my nose.   Too bad they didn't.   Jimmy Durant’s ‘snozz’ is small compared to mine but he was able to make a fortune with it. For me, it’s of no financial value, except to breathe with.  The ferry ride used to take about 25 minutes and landed us at the wharf on .  I used to go up to Woodward’s and Eaton’’s with no money, and just go through the shopping aisles, envious of what was for sale.  Do you remember the Big Little Books that were for sale for 5 cents?  There was a real rivalry in those days between North and .  Every 24th of May, we had the annual race on , culminating in a wonderful spectacle on with the maypole dancing and music supplied by the West Vancouver Boys Band led by Arthur Delamont.  In those days in the band, I was still a midget in size, and here's poor ol' me in the parade, barely able to carry and play a huge bass tuba.   One of the weekly events was to take in the local theatre with a gang of us kids.  It had a balcony, where we would all stomp our feet, during some hectic or romantic scene in the movie, sending Mr. Pettigrew up to throw out as many of us, found to cause all the noise.  At the ripe age of 11, I discovered that I could see the screen more clearly, by looking through my pet telescope.  This ultimately caused my vision to deteriorate, resulting in glasses to be worn permanently at 13.   Halloweens were always a riot, compared to today.  It was normal to light bomb or string of firecrackers at the doorstep of a house, ring the doorbell, and hope the occupants would open the door at the right time.  Also, on many occasions, the police were as close to catching us, as the width of a baseball backstop.  I can still feel them breathing down our necks.  Do you want how 4 of us started the Radio Club in West Van in 1943? or my wife and I, getting a week of front page stories in the Sun, Province and News Herald, because we were the first to be married at the P.N.E. and the uproar that followed?