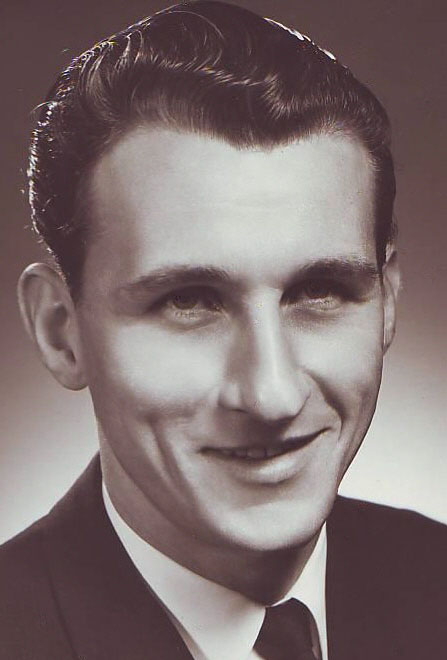 Carl Waiz graduated from in 1953. He was quite the basketball player and a very popular guy in school. It was there Carl would link up with his wife to be, Doreen Alhstrom.

Waiz first trained at CJDC in in 1958 but was hired away by CJOR in the same year. Carl was a natural at his job of reporter, good voice, precise writing and never missing the point.

He was hired at the “Top Dog” station in 1960 when it was still located on in . He worked in the news department for almost twenty years starting out with Mark Raines, George Garrett, John McKitrick and news director Warren Barker. Carl worked at night in the beginning but soon rose through the ranks until he was the senior reporter. Norm Grohmann and Carl worked as a team on the afternoon show in the early 60’s. He was relied upon to be first on the spot when something happened south of the . By this time he was married and raising a family in White Rock.

Carl was known and respected by policeman and fireman working out of an office at in . He worked alongside, Russ Froese and Brian Coxford, training such notables as Belle Puri and Pamela Martin. He taught as well at BCIT in the radio program. He had a dry sense of fun which was appreciated by his peers.

He loved biking, jogging, listening to pop music and being with his family.

One day in 1977 Carl collapsed on a jogging trail in White Rock after suffering a seizure. Diagnosed with a tumour – he continued his duties in the CKNW newsroom until incapacitated.