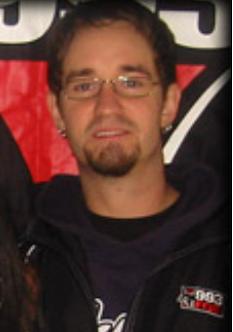 There is many a circuitous route that one can take to embark on a broadcasting career. But rarely, if ever, does a casual song request and ensuing conversation lead to an immediate friendship and eventually open the doors to employment.

Such was the case for Todd Hancock, the gifted and talented new morning host of 's modern rock station, Extreme 107.3 FM.

As the story goes, Hancock was a BCIT broadcast student when he casually phoned the CFOX request line one evening, looking to hear a particular Metallica song.

"I called Jeff O'Neil at The Fox to ask for the song and he told me they didn't even play it." he said. "I started in on him a bit about why they didn't and he eventually invited me down to the studio to sit in and watch the show."

The two became fast friends and since Hancock displayed such a natural affinity for the broadcast business, others in the building soon took notice. Among them, CFOX program director Bob Mills.

"Todd first came to my attention about five years ago through Jeff," said Mills. "And since he showed such a passion and a real love for radio, he learned to absorb all he could from the talent around him like O'Neil, Larry and Willy, Bill Courage and others."

Passion aside, Mills passed on his wisdom to the eager student, including the simple reality that most up-and-coming broadcasters soon learn: Start at the bottom.

"Despite all he may learn here at The Fox, the chances of starting his on-air career in a major market like were extremely limited." said Mills. "I told him to go for a job in a smaller radio market, wear all the hats he could and learn everything possible."

That first job occurred four years ago in Smithers and coincidentally came about on the last day of his broadcast course. The Smithers gig soon led to a much better position in Prince George where Todd did double duty between the company's FM rock outlet The Max and its country AM sibling, CJCI.

From there, the rise was swift and though Todd's first days were a bit rough, he ironed out the wrinkles quickly.

"I was told in Smithers that I was a bit of a smart ass and would be lucky to pass my three-month trial period." said Hancock. "And I had a similar situation occur with one of my broadcast instructors at BCIT so I started believing that maybe they were right."

Fortunately for Hancock, they couldn't have been more wrong.

His time behind the scenes at The Fox proved invaluable and since he had left such a good impression on Mills, it was just a matter of time before those two would reconnect.

Hancock was among the new hirings when CFOX underwent a format revamp in November and cleaned house. It showed Mills in short order that his instincts on the lad were bang on.

"After being on the air in a good medium market like , he really put all the pieces he had learned together and it really clicked," said Mills.

"Not only has Todd been blessed with a lot of the tools of the trade naturally but he's so passionate about radio, he maximizes what he was given and continually strives to better it.

"This kid has a very bright future."

And though there's plenty more chapters to be written in the story, he's already met both his short- and long-term broadcast goals in near record time.

Last month, Todd took over the morning slot at Extreme 107.3 as part of the tandem of Houle and Hancock, hosting alongside his former fiance and good friend Tiffany Houle.

Add to that the peaceful environs of 's area and life looks pretty good these days.