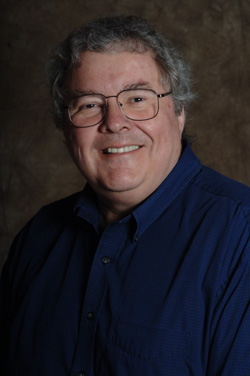 Went with Mel Cooper to CFAX as news director

2002 - Seacoast Communications, which owns Extreme and its AM sister station, C-FAX 1070, has also named veteran broadcaster Terry Spence as the company's executive vice-president.

Spence previously held the title of operations manager for both C- FAX and Extreme.

1996 - CREATING COMMUNITY in the workplace is an achievement. CFAX has gone several steps further and created an extended family.

Terry Spence, the vice-president, is open and easy to talk to. He's been with CFAX for twenty-two years "started as a young child, actually." He describes their approach: o "Say thank you a lot. When someone gets an appreciative letter, we post it with a note 'way to go.' We recognize that people are working hard. o Have regular meetings. Everyone gets a card on the anniversary of the date he or she started with the company and on birthdays. We have a fast ball team, people curl together. We get together at the retreat and the summer picnic - it's a family situation. When Ken Dobber, very much one of the family, died it was very hard on us all. We still talk about him. His picture still hangs in the hall. o Try not to have too many rules. I sent a note to everyone and asked them to let me know if there was any rule getting in the way of their doing their job. o Empower people. No one here is chastised for taking action. Like the good Samaritan law - if you stop and help someone and something goes wrong, you're not going to get sued. o Try to make it fun. When I got here I heard a news director had a rule - no laughing in the newsroom. I changed that quickly. There's lots of humor here. The people are great. You know, Terry Spences could come and go. No problem to replace me. But if we were to lose Rebecca, that would be tough!"

Rebecca Reeves seems to be the heart of this organization. Her switchboard/desk is the hub. She's been the CFAX receptionist for fifteen years. She is friendly and ever-cheerful.

"Mel and Terry don't always succeed, but they always try to do the best. I wish I could tell you their secret, I would tell everyone in world. It's an attitude. Respecting each other. It's listening to what people need; what they want; what they can give," she said.

"Mel has always been very big on communicating. His door really is open but finding him there is not always easy. Our annual gathering used to be at Mel's house. We outgrew that, but there's still a family feeling. Another thing is appreciation. The most important words are 'thank you.' And lots of caring for each other. When I had to have jaw surgery, I was going to take holiday time. Terry said, 'We don't want you spending your holidays in the hospital, just take the time.' More bosses should treat their staff well. But don't make us out to be a utopia. It's just a great place to work."