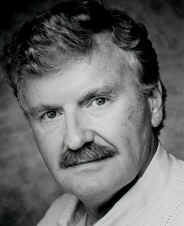 Terry Moore became a familiar voice on CKNW. He regularly filled in for all the Talk Show Hosts before leaving CKNW for CHQR, in 1992.

From coast to coast, Terry Moore has been a popular personality on the radio for over 40 years. Terry has helped wake up New Yorkers on WTFM, and hosted successful talk shows in and , as well as nationally on  the WIC satellite network, before bringing his boundless energy and infectious mike-side manner to C-FAX.

Terry's ease with an audience comes naturally: he's also an all-around stage performer, having studied music in and , sung opera and musical comedy professionally, and appeared in a number of TV series.

On top of it all, Terry Moore is a published author. His book, "Toothpaste & Peanut Butter", turned into one of the country's more successful collections of household hints, stories and recipes, selling over 75,000 copies since 1988 (and still in print).

As well as hearing Terry daily from 3-7pm, you can catch Terry live and in person in any number of venues: as a dinner speaker, or hosting C-FAX's live on-location broadcasts around Greater Victoria.

One day, Flo Daws was listening to the radio when CJOR talk show host Terry Moore agreed to be the leader of any listeners looking to get some exercise. Originally they met in , but then arranged access to Swangard Stadium because it was a more central location.

"It was outside and I thought I'd like that better," says Daws.

Right from the start, 's Milers as it was originally called, included monthly social gatherings which the club still does today. Eventually 's interest waned, he changed radio stations and moved away from the Lower Mainland.

Today is the last day for Calgarians to hear Terry Moore's on- air conversations.

The popular host of the QR77 Morning Show with Terry Moore is quitting the talk radio station, where he has hosted the morning program weekdays, Monday to Friday, for the past five years.

Every morning he has had to wake up at to get ready for his show's ultra-early start, he says. But come this Monday morning, he hopes to snooze a little longer.

"I'll be sleeping in until at least ," he says with a laugh.

"Even that's probably a bit of a stretch."

He's far from retiring, though. He plans to spend more time with his family and pursue other interests. He'll continue his acting career and help his wife and two daughters run Capilano Canyon Guest House, a bed and breakfast that they own in .

, 63, has commuted from his family's home in to every week for the past five years.

He has four children and six grandchildren.

started his broadcasting career in , and did stints at radio and television stations across , including 's CKUA, CFCN Radio in , 's CKFH and the former WTFM in .

He started at QR77 in 1992, where he hosted a talk show until moving to the morning time slot five years ago.

Jay Donald, QR77's program director, says is "quite a character," who has often kept the radio station's phone lines busy with his lively, sometimes controversial topics.

"He had a knack for riling people up. . . . He'd do a piece with some bishop who had sort of lost his way from the church's doctrine," says Donald.

"Boy, he'd whip some of the audience into a frenzy when he did that. If he wasn't getting as much response as he wanted, he'd say, `Hey, listen, don't sit on your hands for this one.' "

, however, says his most memorable interviews have been with the stars.

He once spent a day on the MASH set, and hung out with Milton Berle at Berle's home.

He also interviewed actor Kirk Douglas in , on assignment for a radio station in several years ago.

promised him a 20-minute chat over lunch, but the meeting sparked into a friendship.

"Two and a half hours later, we were still talking," he says, adding that he still has a letter he received from .

He cherishes his memories of meeting comedian George Burns, too.

"I walked into his office and he was getting ready to do a television special," says .

is also an accomplished TV, stage and movie actor who has appeared on many TV and movie productions, including two made feature films, My American Cousin and its sequel, My American Boyfriend.

"I played the cigar-chomping, loud-talking uncle," he says with a laugh.

In addition to radio, trained as an opera singer and was a founding member of the Alberta Opera Company (now the Edmonton Opera Company).

And he's an author, too. In 1988, he wrote a best-selling book, Toothpaste and Peanut Butter, a household hints guide that sold 75,000 copies and is still in print.

He's currently working on a second book, but he will say only that it is a "corporate" book.