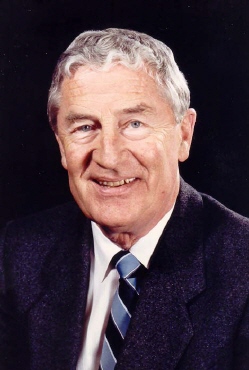 The RCAF veteran, who went on to host CBC's Reach for the Top student quiz show, led the 600 students of Victoria College, the predecessor to UVic, in a march on the legislature, demanding more space, in 1946.

Within the week, the government moved the college from Craigdarroch Castle to the Normal School, now Camosun College.

He was a year behind Garner, who was the first president of the student council to be a veteran.

"Terry Garner, born in Armstrong, was well known and well liked and certainly able to express the student views on what was needed," Roy said in an interview Wednesday.

"When the student veterans went there after the war, the population doubled to about 500. It put a tremendous strain on the castle. It became a fire trap.

"It was decided to stage a protest.

"It was the only college or university protest where the students were marching in step."

Garner took his cue from college principal J.M. Ewing who told the returning veterans: "I am ashamed to bring you into buildings so unsuitable for your reception . . . buildings whose accommodation is makeshift and wholly inadequate."

Garner asked the authorities to free up the Normal School for the college, but was met with silence.

On Oct. 10, 1946, Garner led the entire student body out on to Fort Street behind piper Douglas Leask and the almost unheard-of student protest descended on the city and the legislature.

The protesters met Premier John Hart, who immediately appointed a special committee to look into the problems.

Five days later the committee reported back and the college moved into the Normal School again with Garner at the head.

On graduation he started a career in broadcasting in Victoria. He worked at stations in the provincial capital, at Vancouver, Hamilton and

1961- 1982 he was host of CBC-TV's Reach for the Top, a knowledge quiz which had teams of top high school students from across the country compete for top school in Canada.

1974-1991 he was a senior member of the broadcast communications faculty of BCIT.

Terence James Garner, who was master of ceremonies of the long-running CBC-TV show, Reach for the Top, the popular quiz program for B.C. high-school students, died Saturday of cancer in Port Moody. He was 69.

Garner was born in Armstrong, and was educated at Victoria College and the University of B.C. During the Second World War he served with the Royal Canadian Air Force.

After the war he was persuaded to try broadcasting by his friend, retired CKNW disc jockey Jack Kyle and over the next 20 years he worked as an announcer and program director with stations in Victoria (CJVI and CKDA), Hamilton, Ont., and Montreal, & at CKWX and CHQM in Vancouver.

Garner was the original editor of the Vancouver entertainment guide, Q Magazine: A Guide to Entertainment and the Arts. In the 1960s, Garner, co-owner of a stable of racehorses, also wrote a column on horse racing for Vancouver Life magazine.

Garner was a jazz buff and organized concert tours in the late 1940s and '50s for the Duke Ellington and Woody Herman bands.

Reach for the Top debuted in 1961 in Vancouver and was an instant ratings success. The following year, the show was picked up by CBC Edmonton and by 1966, 23 stations in all 10 provinces were carrying the show with about 600 schools taking part.

Although the program had different emcees in all the provinces, friend Lyndon Grove, who worked with Garner at CHQM, said it was Garner's show that was used as a training model for other CBC hosts.

``One of whom was a young Alex Trebeck, now host of Jeopardy!,'' said Grove. ``Sometimes when I watch Trebeck, I see Terry's mannerisms.

``Terry was a perfectionist. He was a man intensely concerned with he rightness of things -- the choice of words, the performance of music, the playing of games, pronunciation, spelling, protocol, timing and professionalism.''

Former prime minister Kim Campbell remembers Garner as ``one of the local voices everyone knew . . . like Fred Davis.''

``He was a very nice man and he did it very well,'' said Campbell, who recalled making an appearance on the show in 1964 as part of the team from Prince of Wales school.

``It was an honor to be chosen. We didn't even have a full team, I don't know why. I sat next to Fred Grauer. I became famous; he became rich.''

Garner was replaced as host in 1982 by Eric Dwyer, and Reach for the Top was cancelled in 1985.

In 1974, Garner joined the faculty of the B.C. Institute of Technology in the broadcasting department, and retired in 1991. He recently completed a series of scripts now being aired on the Knowledge Network.