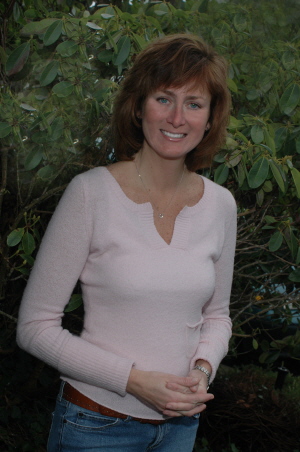 Sarah Daniels was voted most likely to host Saturday Night Live by her Grade 12 class. Late at night, when others were too tired to see, night owl Daniels was still chatting, spinning clever stories and off-the-cuff jokes. Anyone foolish enough to call her before 10 the next morning learned that she was, indeed, still verbally proficient, though a tad less cheery.

Now, as traffic and weather reporter for BCTV News, Daniels is up and chatting by 3:30 a.m. -- first to her beloved dogs, then to bad drivers as she makes her way to work.

"At that hour, you are driving with drunks and delivery people. It's a little bit scary through those intersections."

Then it is seven minutes talking with the make-up people. "Unfortunately, they do not carry plaster of Paris."

Daniels has a bit of time to trade news with her amiable fellow morning crew, Lynn Colliar and Zack Spencer. By , though, it's curtains up for the gifted talker's ideal job, on-air TV, delivering timely advice peppered with witty quips.

For those who love to talk, another quiet day in front of an unsmiling computer is too hideous to contemplate. Some satisfy their yearning to yak by taking extra trips to the water cooler. The lucky ones, like Daniels, find a way to get paid to speak.

Daniels was not always talkative. "I was actually pretty shy as a child. I got to reinvent myself in high school. I got chatty."

Daniels travelled through Langara College, the and work as a broker's assistant. Though she was not sure what she wanted to do, she knew it was not detailed paperwork. "The little itsy bitsy drives me bananas."

A friend, Barry Forward, was working for AM 1040 and suggested she apply for a job as a community events reporter. "I never ever thought about such a thing. Absolutely not."

Nevertheless, she ad-libbed a demo tape and got hired on the spot. "Through luck, circumstance and good timing, I bluffed my way into a good job," Daniels said. Unlike most on-air personalities, she did not go through specific broadcast journalism training and years of small town work.

On her first day she was supposed to do the news, but did not know how to turn on the microphone. She gave herself a crash course and ended up working the morning show with Stu Jeffries and Elaine Scollen. "On air you pretend as though no one is listening but the person you are talking to. You don't think about the audience, that will freak you out."

Her easy banter led her to eye-in-the-sky traffic work at CKNW. Her first host, Rick Honey, taught her a lot about talk radio. "He was really generous about sharing air-time and letting you shine." Daniels still does some fill-in work at CKNW.

With no script, Daniels is working off a clipboard crammed with traffic notes from ground control, emergency crews and the listeners line. She has to squeeze all of this information into 45-second sound-bites.

"You have to think of the most important things and keep it succinct. I have to watch my tendency to talk fast so people don't wonder what the heck I'm yammering about." You also need to have a good memory, a flawless sense of direction and an ability to keep talking if you make a mistake.

Daniels has enjoyed a lot of good feedback although, she says, "Occasionally my lack of ability to edit has caused me to step in it."

When Lisa Green, a BCTV producer, approached her about auditioning for TV, Daniels was not particularly optimistic.

"TV people have bulletproof hair and perfect skin," Daniels says. "I don't." Once again, though, she got the job. "I was broke, so I was thrilled."

On TV, Daniels says, you have to watch the "smartass political comments." Much more is left to innuendo. "If you are being a little bit naughty in radio it is way over the line in TV."

Now that she is on TV, some people think she lives a glamourous life in a gilded mansion.

"It should be noted that I am wearing a five-year-old, ripped turtleneck and fuzzy track pants." Getting up before the roosters, means there is not a lot of time to meet young eligibles.

"Twenty years from now, I'll be walking up the street, wearing my housecoat, talking to my cats and living in a house with sprayed-on curtains."

Despite the hours, Daniels likes her work. "Everybody has been telling me to shut up for years. Finally I can use it to my advantage."

A native, Sarah Daniels graduated from Crofton House and then UBC, and had a brief career in the stock market before moving into media in 1989 at the age of 25.

She did traffic for various radio stations for the next eight years, including a stint as CKNW's Eye in the Sky, all perky and informed while she talked drivers through the increasingly complex and frustrating slog that has become the Lower Mainland commute.

So was it that nasty alarm clock, a pre-mid-life crisis, or just a strong looky-loo gene that took her in a new career direction?

All of the above, it turns out.

"I think it must be inherited," says Daniels, who affectionately blames her mother for passing along the real estate bug.

"I would always wait for the Real Estate Weekly to come out. It's just tremendously interesting to me -- the trends, what's selling, what's not."

And she had done about as much as she could with the traffic thing.

"I realized there's no money to be made in television, and I got into my late 30s and thought: 'Am I going to be the oldest traffic reporter around?'"

So she took the real estate course -- it costs about $1,000 and took her a month -- easily passed the test, and started selling real estate part-time for Hugh & McKinnon Realty in White Rock, in June 2003, while still working at Global.