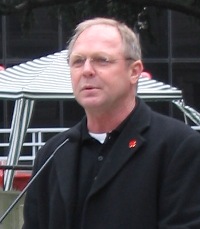 He started his journalism career with CKNW in 1972, moved to BCTV five years later, then joined the CBC in 1980. At the CBC, he worked as a journalist and producer for The Journal and and produced more than 70 documentaries. He has worked on assignment all over the world and has been named Broadcast Performer of the Year by the B.C. Association of Broadcasters.

He's a graduate of the journalism program at , now Langara. He had some exposure at TK Television in Terrace.

working at New Zealand Broadcasting Corporation and in and .

Born in - Married, he skis and is the owner of Beau Belle, a wooden 1964 Chris Craft he uses to explore the B.C. coast.

On , retired television anchor Russ Froese departed for a four-month assignment to in northern – one of the hardest hit areas from last year’s massive earthquake and tsunami.  As an Information Delegate for the Canadian Red Cross, he will report back to Canadian donors on the progress of recovery, the challenges ahead, and how their donation is being spent.

Froese, a documentary journalist, producer, and former Vancouver news anchor for 33 years, is honoured to be able to participate through the Canadian Red Cross in the worldwide effort to help survivors in .