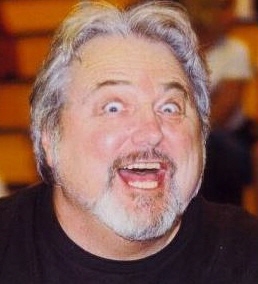 ROS in studio One,

1966 KMBY chart with art work by ROS Four and

Robert O. Smith is 60 going on 16, and just might be the strongest near-senior on the planet.

The motor-mouthed former DJ and staple of Vancouver TV and radio commercials just set a world record in his weightlifting class by bench pressing 420 pounds recently at the Canadian Powerlifting Championships in .

Smith has won several world titles in the past from organizations with interesting titles like the World Drug-Free Powerlifting Association, the World Natural Powerlifting Federation and the World Association of Bench Press and Dead Lifters.

But he's pleased as punch with his latest feat, which came at an event sponsored by the International Powerlifting Federation (IPF).

"This IPF [win] is my most prestigious world record yet," he said. "It's the one some people would say is the only legitimate one."

Smith is something of a 21st Century Renaissance Man. He's strong as an ox, he's funny as hell and he dabbles in all sorts of stuff, from animation to art and music. (Many of his creations can be viewed on his Web site, www.robertosmith.com.)

Walking into his apartment is a hilarious experience. The first thing you notice is a giant painting of a female nude on the wall.

But it isn't just a regular nude painting, it's a 3D nude painting. He hands you some 3D glasses, and the body parts come alive, growing to monumental proportions.

Smith seems larger than life himself. He's a fairly big guy (five foot nine, 275 pounds), and has an irrepressible personality and infectious sense of humour.

His quick wit was what brought him to in 1983, when he was recruited out off a radio station to work at CFMI.

"I was morning man for a while, then I was night man, then I was the dishwasher," deadpans Smith, who was born near in .

"They wanted a morning man who was somewhat animated, so they listened to me for two weeks and offered me the job. I always loved , so I moved up.

"Then as soon as I got here they said, 'Ahhh, you didn't sound that animated down there. Could you be kinda calmer? Just don't be so far out, please.' I said 'You want me to be like the guy you just got rid of?' 'Well, kinda.'"

One of his strengths on radio was his ability to do countless imitations off the top of his head. He calls himself "the man of eight-seven and three-quarters voices," and runs through many of them in a half-hour visit: JFK, James Mason, Michael Yorke, Jerry Lewis, Arnold Schwarzenegger, Henry Kissinger and Wolfman Jack.

Wolfman Jack was one of the inspirations for him adding "O" to his stage name.

"The reason I use the O is because there are so many famous Robert Smiths," he explained. "There's Robert Smith of the Cure, although he's not in my weight class, and there's a guy who I look more like everyday, Wolfman Jack. Wolfman Jack's real name was Robert Smith."

But he declines to say what O stands for.

He stayed at CFMI for seven years, and also did a stint at CISL. But his bread and butter has become voiceovers for cartoons (he did a guy called Grunt in a GI Joe series, and recently auditioned for the Bluto part in a new Popeye cartoon) and commercials.

"I'm the voice of London Drugs," he said.

"I'm pretty bombastic on the TV ads. You turn the TV off, and you can still hear it."

His weightlifting obsession began in his teens. Life intervened, and he put aside weightlifting until he was in his mid-40s. when he got into powerlifting.

His current goal is to get ready for the International Powerlifting Federation world championship, which will be held this October in .

He hopes to shed some weight over the summer so he doesn't have to compete with giants.