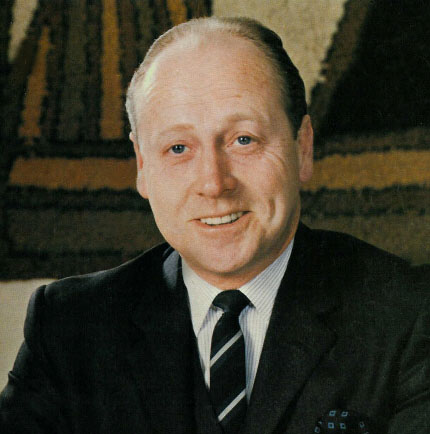 I was eight when I got into radio at CJOR. I worked with guys like Alan Young, Fletcher Markle and Dick Diespecker. I was a child actor, singer and musician. My brother Wally was program director and I just followed him. I earned $8 a week and don't laugh, that was big money in the '30s."

It is a paradox of broadcasting that the most powerful men are the least known. An overnight disc jockey, doing a rip-and-read newscast at , may have a wider public profile than the president of his station chain.

So it has been with Peters, but he has had his finger in your eye for almost 30 years, since those 30 desperate months when he took hold of a collapsing television station, tourniqueted its bleeding money loss, and turned it into the dazzling financial and ratings success that BCTV is today.

PETERS STUNNED the broadcast and the general business community yesterday when he announced his immediate retirement as president and chief executive officer of Western International Communications Ltd.

The impact of the announcement was so powerful that some just couldn't believe Peters wasn't pushed.

A one-time broadcast rival, communications consultant Don Hamilton, said yesterday: "I heard the announcement on television. I almost fell off the sofa. I just can't see Ray walking away on his own volition. He built that company. He is that company, in the eyes of the CRTC and the financial community."

Peters, whose most public venture into the spotlight was his chairmanship of a committee to restructure the bankrupt Vancouver Symphony Orchestra, was amused and disturbed by rumors of a WIC power play. He said yesterday: "I shocked a lot of people. But it was a natural decision and it was my decision. I have always wanted to retire early and this isn't early enough.

IN 1961, Peters was asked to join Vancouver-based Vantel Broadcasting, headed by Art Jones, which owned two television stations, CHAN in , CHEK in . The company was losing $100,000 a month and had a back-breaking debt load of $3 million. Peters says: "Art put it on the air and eventually, since revenue was the problem, I took over as sales manager."

In less than three years, Peters turned the operation around and one of the biggest factors was his gamble that a nightly one-hour newscast would pull viewers and advertisers. BCTV's News Hour today has the largest evening news audience of any market in .

(When Peters moved downtown 11 years ago to run WIC, revenues were $27 million a year. Today, as he leaves, total revenues are $230 million.)

said yesterday: "Ray was an exciting guy to work for. He had a mercurial temper, but he backed the news and defended it against client interference. He created the hour."

That may be the highest praise Peters could get. Six months ago, BCTV management summarily sacked . As CEO, Peters could have overruled the firing of one of the three news architects but declined. Now there is only Parsons.

It was his work as a performer, musician and writer that led Ray Peters into a long and varied career in broadcasting in 1934. Following stints as a record company promotion manager and program producer, Ray became the first commercial manager of CHCH TV Hamilton when it went on the air in 1954. In 1963, he moved to and the managership of CHAN-TV. Subsequently, he was appointed to the Presidency of BCTV Ltd., a post he held until 1981. Peters also served as President of the Association of Broadcasters, and was President of the Canadian Association of Broadcasters in 1960.  Following his term at BCTV, Ray formed his own company - Peters Management Limited. In 1989, Ray Peters was inducted into the CAB Broadcast Hall of Fame. Born December 14, 1926