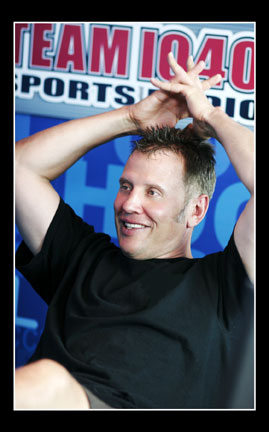 From a colonial outpost governed by whim from the imperial throne in Toronto to Vancouver sports heavyweight, TEAM 1040 AM has come a long way, baby.

Ratings just released by the Bureau of Broadcast Measurement show the Pratt and Taylor afternoon drive show is tops in the market for males aged 25-54 with a 13.7-per-cent share of the market.

That [13.7] is the highest for the station and to my knowledge, in terms of share points, the highest in the history of Canadian radio that any sports-talk show has ever achieved," co-host Dave Pratt said Tuesday (Toronto's FAN during the Blue Jays' World Series years may have exceeded that number).

"I remember the first 90 days I was working here, I thought I'd died and gone to hell. It was a disaster. It was part of the CHUM chain, run out of Toronto and everything you could do wrong, they were doing wrong.

The morning B-Mac and Rintoul show, once ninth in the market, came in third behind JACK and ROCK 101 with a 9.0 share, impressive when you consider that's roughly the number Edmonton's country-radio station draws in prime time.

"We're going in the right direction," morning co-host Barry Macdonald said. "I'm being cautiously humble because you're only as good as your last book -- but our last book is pretty good."

The ratings were collected between Jan. 7 and March 2, measured by listener diaries.

It'll be a whole new story for the next ratings period (April 14-June 8), of course, with the Vancouver Canucks gone golfing.

On the other hand, Fan590, a Toronto sports-talk station, saw its number jump to 4.8 from 4.2 from last period.

"Well, it's no different from what we went through with the [NHL] lockout," Pratt said. "We had to find different ways to be creative and entertaining and we're certainly going to do that.

"This is probably less of a challenge than during the lockout where we didn't have any hockey and our ratings went up then, too."

The TEAM will focus on the NHL playoffs and this weekend's Masters.

"It's still one of the best times of the year. Everyone's in a hockey pool. There's lots of hockey, lots of baseball. Football's just about to go. The Masters goes this weekend.

"There’s a lot out there. It's not as cut and dried or as easy as just saying, 'Hey, when in doubt talk Canucks.' You have to work a little harder, dig a little deeper.

"But in the past when we've been challenged in that respect we've never had a problem finding enough material to make our show interesting and entertaining.

"I don't see that changing."

Rick Ball's noon show was fourth, behind the FOX and the other two FM rock stations, with a 7.8 share.