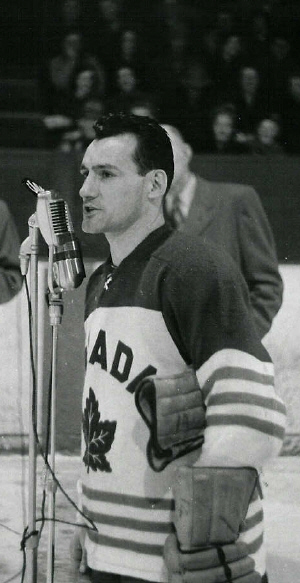 2.  Player interviewed on radio with fans nearby

3.  Team takes a bow – two of the Warwicks on left

4.  Grant Warwick, above, speaks to crowd on radio

When the call went out for someone to restore Canada's pride in international hockey in the mid 1950s, the Penticton Vees stood up and answered that call. Just one year after the Canadian Champion Toronto Lyndhursts had suffered a humiliating 7-2 loss to the USSR at the 1954 World Championships in Stockholm, the Vee's restored our nation's pride.

To say the robust Vee's were a 'hit' at the 1955 Championships in West Germany would be an understatement. Led by the Warwick Brothers - Grant, Bill and Dick - the Vee's made an immediate impression with the fast-skating, hard-hitting style of hockey. Grant Warwick, the NHL's Rookie of the Year in 1942, was the player coach of the team who earned the right to represent Canada at the World Championships by virtue of their 1954 Allan Cup Championship.

The Vee's blanked the defending champion Soviets 5-0 in the championship game, as Bill Warwick notched a pair of goals and Mike Shabaga bagged the winner. The final game was broadcast from coast-to-coast in Canada on CBC radio, with the legendary Foster Hewitt calling the play-by-play.

Because of the time difference, the game was actually heard in Canada on the morning of Sunday, March 6, 1955. The early hour didn't deter Canada's hockey fans, though. The broadcast was said to have attracted the largest radio audience in Canadian history, up to that time.