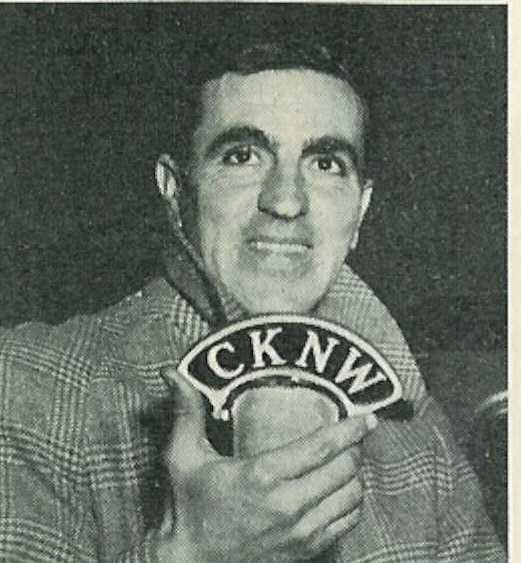 Wednesdays - from ‘the press box show’ on CKNW

Pat Slattery, a former sports columnist and men's fashion columnist for The Vancouver Sun and a North Vancouver district alderman for nine years, died Saturday November 12/88 in after a lengthy illness which involved a cancerous brain tumor. He was 76.

Mr. Slattery is survived by his wife, Doreen and three children.

Born and raised in the West End, Mr. Slattery was taught how to swim by legendary lifeguard Joe Fortes.

In a 1985 article, Mr. Slattery recalled: "The present is nothing like the past. But when you have lived through the changes, memories of and old Joe are pure happiness."

He joined the Canadian army in 1942 as a private with the Irish Fusiliers and wound up his military service as a member of Gen. Dwight D. Eisenhower's public relations staff in .

Mr. Slattery was discharged as a major in 1946 and rejoined the Vancouver Sun, working first in the public relations department.

He later become a sports editor and columnist and wrote a popular weekly golf column called Opening The Face.

Doreen Slattery, his wife of 36 years, recalled that her husband always said that when he first joined the newspaper as a copy-runner in the 1930s, he was told the job might not last long.

He was one of the first journalists in the country to write a regular column on men's fashion. Mr. Slattery, known as a dapper dresser, often acted as a moderator at fashion shows and was sought out by politicians wanting tips on how to dress properly. He started writing fashion column in 1962 and continued for more than 25 years.

Mr. Slattery actually retired from The Sun as a page make-up editor after a 47-year career with the newspaper in 1977.

In 1966, Mr. Slattery was first elected alderman in district council, where he continued to serve until 1975.

One of his main areas of interest as an alderman was in providing recreational opportunities for young people on the . He was involved in establishing the Karen Magnussen, Ron Andrews and William Griffin recreation centres.

"That is really what kept him going: trying to provide recreational activities for young people," Doreen Slattery said.

A service will be held at United at Wednesday, Nov. 16.

More than 350 people crowded into West Vancouver United Church Wednesday afternoon for a memorial service for Pat Slattery, a former sports and men's fashion columnist for The Vancouver Sun.

Mr. Slattery, who died Saturday afternoon at 76 after a lengthly illness, was fondly remembered by Rev. John Gouws during the service attended by many newspaper and media colleagues, political associates and long-time friends.

Rev. Gouws recounted to those paying their last tributes to Mr. Slattery how the newspaperman retained his hopeful and positive attitude and keen interest in sports despite his illness.

During a recent visit to his bedside in , Rev. Gouws recalled Mr. Slattery listening to a Canucks hockey game with a radio earphone plugged in one ear.

Gouws asked him if he wanted to say a prayer. Mr. Slattery nodded yes but kept one ear listening to the game and one ear to the prayer.

Then, just as Gouws said "Amen," Mr. Slattery countered with "They scored."

"In my experience, I think he would like us to remember him with a smile," Rev. Gouws said.

After the service, his wife and family welcomed and shared a few words with those in attendance as they left the church.

Once during a golf tournament in , Mr. Slattery went home after the first nine holes and returned for the second nine in a brand new golf outfit.

"And the second one was just as sartorial as the first," said.

A colleague of his during part of Mr. Slattery's nine-year stint as alderman, she recalled his good-natured but firm advice to rookie aldermen.

I met Pat Slattery at the fights in 1952 and it was a moment not to be forgotten.

Working in Victoria, I was of course familiar with his byline on the Sun sports pages but I had never met the man until my paper sent me over here to cover the Golden Gloves at the old Exhibition Gardens.

I fancied myself as something of a snappy dresser in those days, but when a colleague introduced me to Slattery at ringside, I gaped at his outfit and I suddenly felt like a huge gravy stain.

Slats could do that to you.

When his son Paul called me at home Saturday afternoon to tell me that his dad had passed away that morning, it was no shock. Seventy-six years of looking good is a hell of a run and the idea of Slats in one of those drab hospital gowns with the strings in back was unthinkable.

Slats had been terribly sick. The previous Saturday night, at the Lions-Blue Bomber football game, I was sitting with retired newsies Jim Coleman, Bill Good Sr., Eric Whitehead and Jim Kearney, whose ages add up to The Restoration Period and all Slattery contemporaries.

Paul Slattery stopped by the table to say his dad was back in hospital. I told him to pass on best wishes from the boys from The Home. According to Paul, the message got a trace of a smile from Pat late last week.

That's to the good because life was pretty much an amusement to Slattery except, of course, when he saw a Sun reporter wearing brown Hush Puppies with grey flannels, in which case he would groan audibly. He was not above bracing any one of us with a despairing look and a remark like, "Green tie and blue shirt? How, um, interesting"

Slats created a journalistic reputation without being a racket-busting reporter, graceful writer or visionary editor. He was a competent golf writer and he could put pages together, make the trims in the backshop, match the cutlines to the pictures and get the pages to the pressroom within deadline.

But he created himself, as an enduring journalistic character, when he became our men's fashion writer in 1962, one of the first of that ilk in the country.

He was a natural for it because I have never met a guy who wore clothes better than Slats did. He had the natural well-groomed and barbered look of a Grant but his attire never looked contrived.

While most of us can spend 30 minutes selecting and dressing in the morning and still look like a ransacked closet when we get to work, the never-aging Slats always seemed to have just shrugged into the right outfit. Lint and Slattery never met. Senior assistant managing editor Alex MacGillivray says that Slattery was the first man he met who knew how to shoot his cuffs.

And it wasn't as if Slattery was paid to look good. Through all the years he wrote his men's fashion column, it was a sideline. His main job was as page make-up editor, requiring him to go out half a dozen times a day to the domain of the greasy shirts and lurking ink smudges and work with the printers putting the pages together.

(It's ironic that one of the first clues that Slats might have a brain tumor was the fact that he began to have trouble buttoning his shirts properly.)

As the late Hy Aisenstat made an entire generation of Vancouver people more demanding of restaurant services, so, perhaps, did Pat Slattery make men think about dressing better, even though the market did not always endorse his opinions.

Haberdasher Barron Lee recalled yesterday how he and Slattery went 10 years without speaking, after Slattery suggested to his male readers that they buy their suits in .

"It took me 10 years to forgive him for that", Lee said, "I finally ran into him at a Little League game and we had a laugh about it. I didn't always agree with him, but Pat was a force."

There will be a memorial service for Slats Wednesday afternoon at West Van United and I suspect that all his old newsroom, pressbox and Army cronies will be there in force.

And I'd bet every one of them is fretting about not having a thing to wear, which is not a bad legacy for Slattery to leave behind.