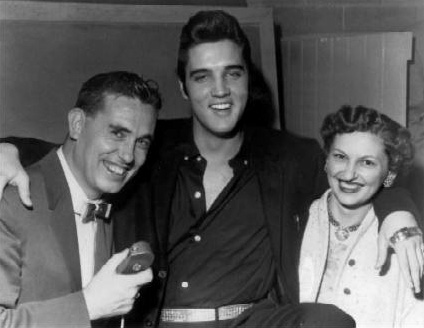 Norm Pringle on left, the King and Norm’s wife Elsie

1945- Hitchhiked to and stayed for a month free, courtesy of the USO (loved ).

1957- We had a son called Garry (named after Garry Crosby)

1958- Moved to and got a job at Western United Recorders as a push button mixer.

Norm Pringle, then a local disc jockey at former radio station CKDA, is credited with discovering Jim Smith. Not that it would have been hard to find a teen wanting to be Elvis in 1956; Elvis-mania was in full effect, thanks in large part to a string of hit 45 singles, including Heartbreak Hotel and That's All Right Mama.

Pringle spun plenty of Gene Vincent and Elvis rock 'n' roll songs on the radio, at teen dances he hosted in Memorial Arena and on his House Party television program on the former CHEK-TV. The station had just opened its doors, but "they didn't have anybody to program it," Pringle said during a recent interview from his home in 's .

"So I came up with an idea for House Party, where we could get various people from high schools to lip sync to the records. Some of them were so good at it, you'd think it was (the real thing)."

One of the teens to catch Pringle's eye was Smith. It was during one of the dances he was hosting that Pringle noticed Smith, a whirling dervish singing along to Elvis songs and mimicking his signature moves.

"I called him aside and said, 'Why don't you practice singing to the records? You can be Elvis on the TV show.' Every time we got a new Elvis record, he came on the show."

That Smith couldn't sing or play an instrument was irrelevant -- after all, this was TV in the '50s. His good looks and ability to replicate Elvis was enough to get the eye of local viewers.

Smith vividly remembers practicing along to the Elvis cut Poor Boy for a week in preparation for one of House Party spots when a thought came to him. "It never went away, people coming up to me saying how they saw me on TV," he said. "I became known as the Elvis guy. So I decided to see how far I could take it."

He travelled the working his Elvis mojo on the masses, and by all accounts he was good at it. His looks helped -- just 16 himself, he was able to pass himself off as Elvis at 22. And as The King was a booming cultural phenomenon at the time, the idea of a local teenager bringing Elvis's sex-charged entertainment to local audiences was a touch controversial as well.

The local media alluded to the sexual aspect as well. When the Victoria Daily Times ran a story on the teenager's success on , the reporter wrote of Smith's "latitudinal gyrations" and his prowess at "wiggling wildly" for the girls.

In the story, Smith talked of branching out on his own as a singer, which he did shortly after his stint as "Elvis of Victoria" began to wane in 1958.

He went on to play in a band in the '60s called Morningstar, before settling down to a quieter life as a B.C. Transit driver in .

Smith hasn't impersonated Elvis since those days, but during his final years as a bus driver Smith says he still drew the occasional look from former fans.

The memories are still fresh, however, for both Smith and Pringle. They were among the 26,000 fans who attended Elvis's 1957 concert at Empire Stadium in , the only concert he ever gave outside of the or . Pringle, in fact, escorted dozens of fans who travelled via Greyhound bus to the event.

But few were as lucky as Pringle. He was one of four members of the press to attend a private press conference after the show, during which Elvis sang Hank Snow songs. The event "has became a real collector's item," according to Pringle. "It's been dubbed, sold, re-dubbed, quoted and everything."

There have been many fond Elvis experiences since then for Pringle, from a chance meeting on the set of the film Kid Galahad to working as a sound editor for MGM Studios on the 1981 documentary, This Is Elvis.

But none had the same impact as the 1957 one when he talked to Elvis in about his upcoming single and movie Jailhouse Rock. He has the photos to prove it. Pringle kept them because he felt this young kid from , was a star in the making.