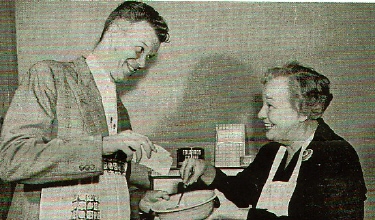 Nina Faith Anthony was born in Australia, later lived in England, France and the - where she studied medicine for five years - before moving to .

Nina says she joined radio station CJOR  (1942-1943) as news director being  paid $13.75 a week and hosting a daily program before working for an advertising agency (Lovick) where she wrote speeches for federal, provincial and municipal politicians.

In the late 1940s, she joined radio station CKMO as program director before moving to CKWX as copy chief and the host of Neighbor Nina, a daily interview program that had the highest rating in its time period.

In 1961 she moved to the to open a restaurant business before returning to to become director of public relations for the Opera Association and the B.C. division of the Canadian Red Cross Society.

After retiring from her public relations career in 1975, she returned to work as a columnist with the West Ender newspaper

Rehearsal time for "Our Neighbour Nina" finds WX staffer Nina Anthony and Cal George in the CKWX kitchen.  Their project: pre-test a recipe for their daily afternoon show, from .  Recipes form only part of "Our Neighbour Nina." Nina and Cal tell where to shop for best buys, give household hints, and discuss personalities of the entertainment world.  A show enjoyed by B.C.'s womenfolk.