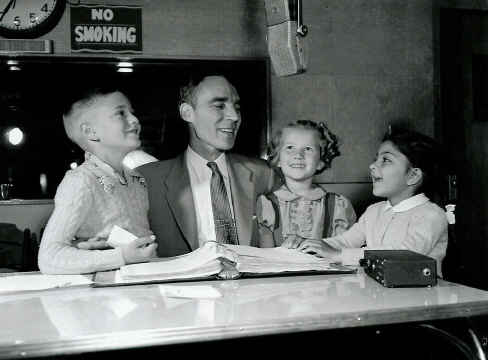 Some people have what is called a “green thumb” and they can make anything grow in a garden. Others have the “magic touch” where children are concerned. Ross Mortimer is one of these.
I can still remember auditioning Ross 11 years ago. He came to CJOR to get a job as a salesman. Commercial manager Don Laws, who is pretty shrewd at sizing people up, listened to his voice in conversation and suggested he audition as an announcer.
Ross became an announcer. He became a good announcer. In fact, he is considered by many to be one of the top ten in Canada. I happen to be one of those who hold this view. I’ve heard them all, and I’ve seen Mortimer walk off with auditions for network commercial cut-ins over the best competition in Vancouver time and time again.
But strange as it may see, after well over 10 years of announcing, and some six years of executive work as program director of the station, Ross Mortimer is rapidly becoming more and more widely known for something different. On many coast-to-coast network shows and his current spot on Harmony House, Ross can punch with the best of them. But three or four years ago he began an afternoon disc jockey show called Take It Easy!
Aimed particularly at the women’s, the majority of men hate the show. Most of his fellow workers kid him about it and call him “The Woman’s Home Companion.” He has a phone connection in the studio and talks interminably with listeners. Yet in spite of male antagonism, he does a job with it. He finds lost children, obtains second-hand cribs for a new family in dire straits or locates an old Irish pickle recipe with equal ease. His audience hangs on his every word, and when Ross tells them to do something, they do it.
Not long after Take It Easy was well established, Ross became host of a program for the youngsters called Kiddies Karnival. The results staggered him. Ross has always had a way with children and for years has done an annual Christmas show from a Vancouver kindergarten, which has been a standout.
When he started Kiddies Karnival, playing special children’s records and keeping a birthday book, he thought perhaps he would get a few hundred names for his 15-minute show. He now has 4,000 names in the birthday book and is forced to run the program for over a half hour each day. Ross has a four-year-old named Patsy Lynne at home himself, and she apparently listens as avidly as all other youngsters. Judging by the deluge of mail he gets and the steady stream of moppets who come daily to sit in on the show, Ross Mortimer, from being one of Canada’s best announcers, is rapidly becoming the top disc jockey with the “snowsuit set.”

Herbert Ross Mortimer born in Winnipeg March 21, 1912.  Lived in West Vancouver before it became too expensive. Died in Beaconhill Lodge December 16, 1975 at age 63. His wife was Hilda Margaret Larkin-Browne - a well known entertainment character. Ross smoked a lot.  At CJOR he and Pat Burns used those long plastic cigarette filters that were in vogue