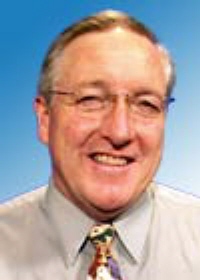 Mike Roberts is arguably the most recognized face in B.C.'s . His career began in 1969 at CKAY Radio in , B.C. In 1972, Roberts entered the world of television at CHEK-TV in doing nine half-hour shows per week, plus the news.

He moved to CHBC-TV in Kelowna in 1973 where he has hosted and produced weekly news programs, served as a sportscaster and, for 25 years, has been "The Okanagan's Very Own" weatherman. Roberts' career is varied and busy and he has been involved in a multitude of projects in his 32 years at CHBC-TV.

He has been the media advisor for the Central Okanagan Crimestoppers Society, honourary chair for the campaign and has been the driving force behind CHBC's annual fundraiser for area food banks. Roberts is frequently called upon to emcee worthwhile events from cancer research fundraisers to Christmas concerts.

The Canadian Meteorological and Oceanographic Society honoured Mike in 1992 by naming him 's Top Weatherman.

Mike's experience has been extensive as producer and host of entertainment, current affairs and documentary programs - Nightwatch, Focus, Eco-Watch, Gold Trails and Ghost Towns (ten years), Okanagan Live and now Pioneers and Places, a new history show that will address itself to everything besides mining.

Mike is the happily married father of three grown sons with whom he can be found playing on the weekends. He is obsessed with golf but has been known to fish, hunt and four-wheel drive. He loves apples and Okanagan wine, and would one day love to own a boat but as he says, "Sometimes it is cheaper to have a dream than to own one."