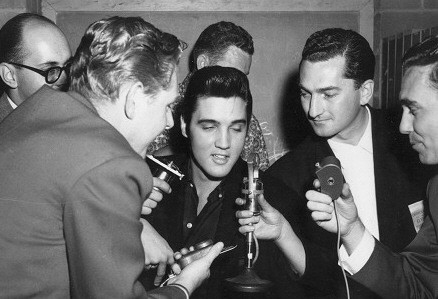 Marke Raines first went on radio more than 50 years ago.  He slammed a book shut as a sound effect during a radio drama at CFCN, the sound meant to represent the angry closing of a door.  He was in Grade 6.  Marke's experience since has been somewhat more varied and exciting.  He was, for example, the first full-time beat reporter in radio.  But his route to that job was rocky.  "I had a lisp and was nasal.  So I taped myself and really listened to my voice and I cured it.  In 1951 I came to CKMO .  I was in the newsroom, and doing some copywriting.  CKNW was looking for a copy writer, but I had no interest at all in moving.  Then Norm Pringle, the productions manager, says, 'Eunice Hoffman's there.'  I said , 'Is that the girl you once said just  the one for me?'  It was and  he was right.  Eunice was working in the NW copy department.  So I went to CKNW.  Bill Rea thought I'd been just a writer, then heard me on air at CKMO.  'Oh, you're an announcer, too.'  He sweetened his offer, he liked all-round people.  I started in January, 1952.  I'd hop the interurban to get out there.  So now I'm half in the news department, half in copy."

"Eunice and I were married ." (A coincidence, Eunice had once worked as a reporter for the Bulletin.  Bill Rea's last employer before he got into radio.  Her own radio experience was varied: she'd been at CFRN, CJCJ and CFRB.)  With Jim Cox's help, Marke got into the NW newsroom full-time.  "Everything I ever knew about news I got from Bill Rea and Jim Cox.  "After I was there about 2 years, Rea got an idea: a beat man, someone who went out in a news car and covered stories out there.  That was a new ideas in 1954.  So they sent me out in my '48 , and I became the first beat reporter in radio."  Marke Raines was a CKNW news "beater" for 10 years.  He and CKNW made another step into the future when he got a car phone, and he used it to call in some stories.

From the book "Top Dog" by