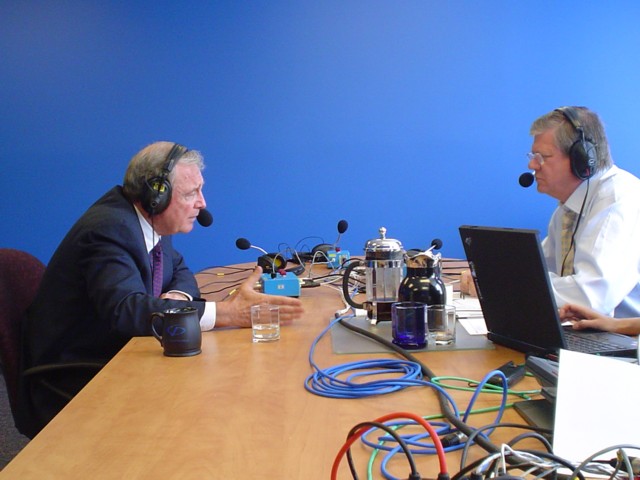 Bill Good on the road in interviewing PM Paul Martin

Good will replace former Social Credit cabinet minister Rafe Mair on the 12:30 to 3 p.m. time slot with Mair moving to the 9 a.m. to the noon show, replacing Bannerman, who is currently on extended sick leave.

CKNW promotions director John Plul said last night that the station had decided not to renew Bannerman's contract, which expires Aug. 31, because of "irreconcilable differences".

Good has been with the CBC for 21 years, beginning with the radio division where he hosted a morning show. He moved to television 15 years ago as a sports commentator, joined the news division and has anchored the evening news for 11 years, most recently with co-anchor Cecilia Walters.

His father, Bill Good Sr., was a nationally-known sports reporter with CBC radio and his brother, John Good, worked for CBC Sports in and with radio station CJOR and CKVU television in .

"All three of us were on vacation, me on , Norm on a boat in Desolation Sound and at home in South Delta. When I got to Denman, there was a message for me to call . From there on in, a lot of the talk was done by ship-to-shore, marina phones and marine radio, everything but notes in bottles.

"As a result, none of us really had a vacation. But we came up with a three-year contract plus an option and I'm pleased with it.

"My only regret about leaving the corporation is that I won't get the chance to work with the show's incoming executive producer, Jim Peters. Ironically, he takes over the day I start at 'NW. But it's time for me to do something else."

CKNW general manager Ron Bremner said: "When we began scouting around, we were impressed with the job Bill did with his out-of-studio public forums, which showed us another side of his professionalism. We're looking for him to take us into the 90s of talkshow broadcasting.

"Gary Bannerman did a tremendous job for us for 15 years and we are making the change, aware that he might come back elsewhere in direct opposition to us. We wish him good luck and good health but sometimes changes have to be made for reasons that aren't readily apparent.

"People will probably say Bannerman was a CKNW legend and how could we let him go. But Wayne Gretzky was an legend until a couple of days ago."