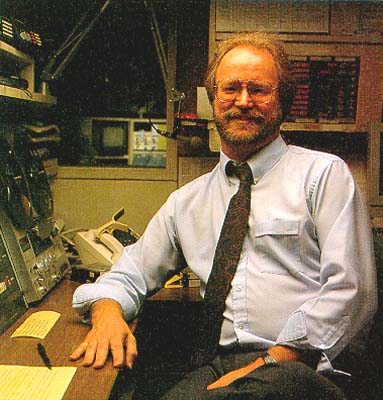 Actually, my predecessor in the job was Jon McComb and I worked as his backup for a couple of games at the end of 1986. Then Jon and I changed shifts at CKNW -- he went to work evenings and I went to work days -- and I took over his job as the P.A. announcer.

The Top Dog has been hit by a catastrophe and a mistake. The catastrophe was Frosty Forst's retirement. The mistake was compounding the blow by a stupid reaction.

The 'NW brains broke up the pleasing afternoon drive-home show -- a smooth game of catch between Philip Till, posing as a stuffy old Englishman, scorned by Jon McComb, portraying a with-it younger guy mocking Till's dinosaur ideas -- and reassigned Till to replace Frosty.

That left both shows damaged.

Till is a real news pro with deep global experience who has handled big international stories like 9/11 with great skill, tapping strong contacts with top reporters. In between such crises he and McComb shared a very entertaining afternoon light- information and sometimes lighter phone-in show.

Jon McComb: If you had told me in January that I would be leaving work for six months, starting in February, I would have said you were crazy. I didn't even consider it as a possibility - there was no way I could take six months off, not with this kind of job. But my mind and body finally just said 'Stop. It's time to stop.' And the people at Corus Radio in have been completely supportive. Management sometimes gets a bad rap, and it can't be easy to have one of your key on-air people disappear for six months, but I've been amazed. Nothing is impossible.

On such solemn occasions as the passing of a friend and colleague, words can be difficult to find. But on his Wednesday evening show, The Agenda, McComb's performance was flawless.

Culling through the NW archives, McComb even included vintage Cullen clips, including one in which Jack is less than thrilled with station management's programming directives regarding his show -- and is quite vocal in his opposition.

McComb's tribute was made all the more moving by the recurring use of Jack Cullen's long-running Owl Prowl theme music, Neil Hefti's sultry "Girl Talk". It was an outstanding tribute to one of radio's true pioneers. Well done, Jon!