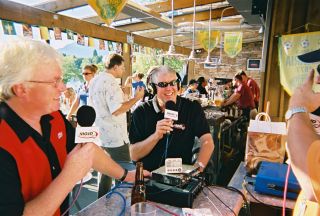 "'McKeach in the Morning On MOJO' will launch the day by waking up McKeach's extensive list of contacts and inviting listeners to join in the freewheeling roundtable," says the station's press release.

The signing of John McKeachie reunites him with former teammate and Afternoon Drive host Bob "The Moj" Marjanovich on MOJO SPORTS RADIO AM 730.

Just months in to broadcast career, watch some of October 1970 festivities outside Pacific Coliseum then make my way to centre of action. Standing in penalty box, lull in the action, fire up reel- to-reel tape machine and proceed to interview Black Hawks owner Bill Wirtz. He stops me to advise he's Tom Campbell, mayor of .

Oops. They had on same colour and style leather coats.

Start again, re: significance of NHL coming here. Mayor suggests it's a good thing and can't wait for us "... to win the Grey Cup." Oops. Word of John McKeachie (born December 6, 1943)