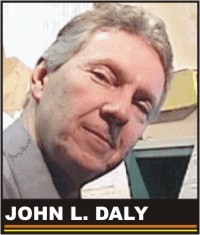 John L. Daly reports for the noon, and newscasts on . John has worked at the station since 1980, with the exception of a three and a half year hiatus. John was born in , but considers his hometown. He has attended CUNY, York, UBC.

The favourite part of his job: "Watching the smiles spread across the faces of the people we help."

Of all his accolades, John is proudest of his first Webster Award, when it was still for the best reporting of the year, in any medium, placing his cameraman, editor and himself against other TV, radio, magazines, and newspapers.

John says his most embarrassing on-camera moment came when he was seen standing silent while a jet took off for what seemed like a full minute.

2002 - So when I hear that it was just one of those lucky coincidences that led a BCTV camera crew to stake out Premier Glen Clark's home moments before the RCMP showed up with a search warrant, I say: Yeah, right.

The story is that BCTV reporter John Daly, who'd been following the RCMP investigation of a poker club at the North Burnaby Inn, heard after Tuesday's raid that another search warrant was to be executed that day. On a "hunch," he staked out the premier's house.

And as several hundred thousand TV-viewing British Columbians now know, the hunch paid off. When police showed up to search 's house, the TV camera was right behind them. Those who missed it on TV saw it the next day on the front page of the Globe and Mail, which chose a video still taken through Clark's living room window to illustrate its story.

1987- The plates were cleared, the bar was closed and the winner of the 1987 Jack Webster Award was John Daly, for his BCTV News reportage of the Winterton affair.

He collected $2,500 and the praise of his peers in the audience as well as on the podium.

Daly said that: " You ask yourself what's important - if this story never gets told, what are the implications?"

Daly described his story (in which a former police constable was convicted of stealing a $60,000 ring) as a case of "a problem of them not taking me off the story."

He kept digging, and found a story.

Webster, who presided at the awards presentation, said: "I'm proud of the journalistic profession. The skills required today are incredible - I wish sometimes reporters had the power to make politicians answer under oath."

Knowlton Nash, anchorman of the CBC National and keynote speaker said that journalism is "history on the run", and that "the media is an agent for the public".

Awards aside, he said the job of reporting in the silicon-chip age "isn't being done well enough - the quality of information does not equal the quantity of knowledge" and urged journalists to "be better agents to the public."'

He cast a knowing eye on Webster and called him "a Scottish god of journalism, looking down from on high" and reminded the dour Webster that "old journalists never die, they just lose their frequency."