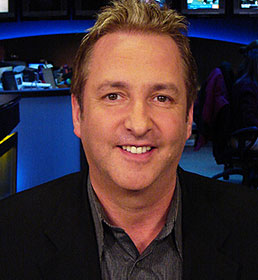 Even his high school yearbook (he graduated from 's Killarney) tells us that Joe had his sights set on being a radio DJ from a young age. He began his professional radio career in 1977, then moved to television (at UTV) in 1994. His happiest career memories to date come from hosting Joe and the Rocket on CHRX AM600 with favourite morning sidekick Rochelle Dentry.

He drinks litres of Coke every day. He listens to 80's music incessantly. But Joe's most guilty pleasure of all is his addiction to less-than-educational (but undeniably entertaining) programs like Blind Date, Elimidate, and Banzai.

Given the chance, Joe would love to host his own outrageous daytime talk show.

Freelance writer and broadcaster Joe Leary, who writes a column on radio for the , does not believer the transmitters are doomed yet. "I think people like to hear a little bit of local flavour and content," he says. "The Internet might attract the dweebs and the real audiophile listeners, but I don't think it will appeal to the masses." While many commercial stations broadcast on the Internet, there is no financial gain to be had-the numbers do not show up on ratings, and some stations even strip their advertising. "It's just something they can brag about-we're on the World Wide Web," he says.