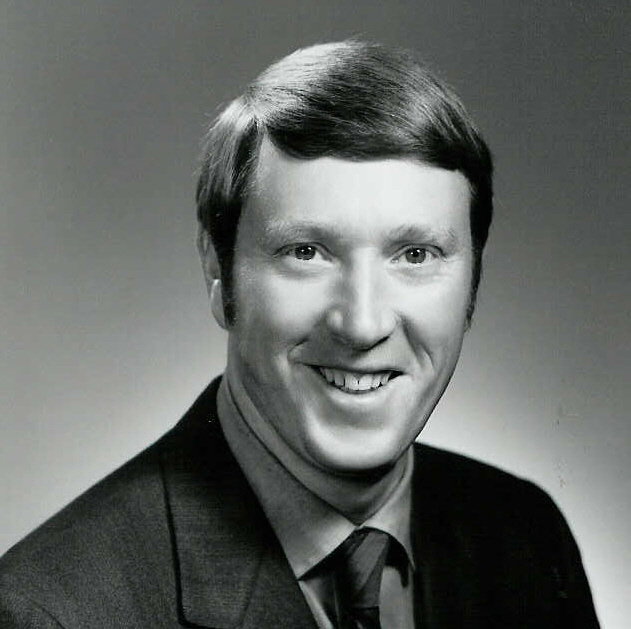 Jim Robson is an enduring symbol of excellence in sports broadcasting. People who have been listening to his play-by-play descriptions of Vancouver Canucks hockey games on local radio stations over the past 34 years, marvel at the consistent high quality of his performances. He is the archetypical professional.

Along with many other of 's most successful sports broadcasters, Robson was born in . His birthplace was . Big Bill Good was born in Wilkie. Bill Stephenson and Johnny Esaw were born in . Cactus Jack Wells was foaled in .

Robson's father moved his family to the Maple Ridge area of the lower mainland when Jim was eight. He got his first radio job at 17 with CJAV in . There, he had his first play-by-play experience - broadcasting basketball.

A couple of years later, Jim moved to as backup man for sportscaster Stephenson at CKWX. And, when Stephenson went to in 1960, Robson inherited the triple-threat job of doing the play-by-play broadcasts of the B.C. Lions, the Vancouver Mounties of baseball's Pacific Coast League and the Vancouver Canucks of the Western Hockey League.

Robson "covered" the Western League Canucks for 12 years and, now, he is in his 23rd year of NHL coverage on CKNW. Originally, he worked "solo," without a color-man. However, the estimable Tom Larscheid joined him in the broadcast booth in 1977. It has been a felicitous collaboration.

Robson, who grew up listening to Foster Hewitt's Saturday night broadcasts from , says all modern announcers are indebted to Hewitt "because he invented the terminology for describing a hockey game."

One of Robson's greatest assets, in earning public credibility, has been his clear-eyed objectivity. Because his employer, CKNW, also owns the Canucks, he is careful to avoid stigmatization as a "house man." If a Canuck player goofs, Robson says as much on the air. If a game is dull, he says it's dull.

At the peak of his profession, at the age of 58, Robson looks back affectionately on almost 40 consecutive years of play-by-play broadcasting. Over the luncheon table last Friday, he spoke with particular fondness of the old Vancouver Mounties. "Baseball is made- to-order for radio announcers," he said. "The listener is completely dependent on the announcer, who gives him a word-picture of the scene on the field."

Incredibly, Robson's long career at the mike has been almost completely accident-free: No network blackouts or announcers getting locked in the men's washroom.

Jim remembers one night when the old Canucks were playing an inter-league game at Someone had neglected to install the phone line in the radio booth to carry Robson's broadcast to . In the crisis, a workman patched Robson's circuit into a telephone-extension which served the concession booths in the arena.

Jim Robson never flaps in such circumstances. In a branch of the news media which has been known to foster some enormous egos, he is refreshingly diffident and gentlemanly. Vancouverites should be proud of their hockey broadcaster.

Thanks to Archie McDonald

The Grade 11s at Maple Ridge bus to a professional day in . The skinny redhead knows his life is radio. Bill Hughes of CKNW gives him some addresses. CJAV in is most interested. He starts after Grade 12, , writing commercials. His salary is $100 a month. Mrs. Wilson, his landlady, takes $70. Deductions ate up $18. With $12 in his pocket he was on his way.

September, 1956. With Alberni Athletics basketball and some Nanaimo Timbermen lacrosse under his belt he applies for an opening in the big time, CKWX, . He asks for $300 month and when he doesn't hear back immediately he worries that he has priced himself out of the market. He gets the job and backs up golden-voiced Bill Stephenson in hockey, baseball and football.

He paid his dues in the early '60s. With Stephenson gone to he does all three pro sports. It is 18 hours a day. A sample of a football broadcast goes like this: After the supper-hour sports news he races to the Cock 'n' Bull Restaurant on Broadway for a pre-game show. Leaves at and drives fast to Empire Stadium where he joins another pre-gamer before the kickoff. When it ends he hurries to the Admiral Hotel on for a post mortem which runs to . In 1961 he broadcast 230 games.

Baseball may have been his best sport. He did the PCL Mounties for a dozen seasons. The road games were recreated in a studio from scant info received on a ticker tape. Producer Ron Robinson had all the sound effects. There was a speaker to announce batters, the thump of a ball striking a bat, thunder and lightning sounds to simulate a rain delay because of weather.

One time the teletype informed them it was the end of an inning, but Robson had recorded only two outs. What to do? If you go to the next batter and have him fly out then you are out of sequence for the rest of the game.

There was a man on base, so Robson decided to pick him off. That kept it neat and tidy. He made it sound like a remarkable play by the pitcher.

July, 1958. He drives pregnant wife, Bea, to hospital, then goes to Capilano Stadium where Phoenix Giants and the Mounties are going for first place. Pete Burnside, ex-major leaguer, is on the hill for the Giants. Catcher Charlie White hits a home run in the bottom of the ninth; Mounties win 4-3. He goes to the hospital and meets his new daughter, Jennifer, the first of four children. Later she will say: "You remember the score of the game, but I bet you don't remember my weight."

If there were a hall of fame for broadcasters' wives, Bea would be a charter inductee. They met in and married 35 years ago last July. She is a gracious lady, not much interested in sports, which makes for a happily balanced relationship.