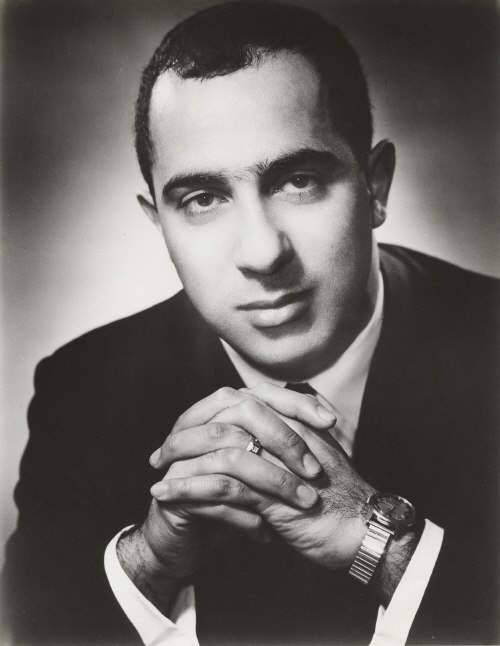 J.J. Richards' career began in 1948 as a disc jockey while going to

school in . CKUA is where J.J.'s editorials were

crashes in and and the funeral of President John F.

Kennedy. He moved to television at CFTO and CBC Toronto and later became a

foreign correspondent in and . In 1980 he returned to the CHUM

family at CFUN where he reshaped the news into effective information

packages. Richards continues to give of himself to many charitable and

non-profit activities including the Variety Club of B.C.

The last time I saw J.J. Richards, the news director of C-FUN radio was sitting alone in his newsroom like some unfortunate general abandoned in his bunker.

He was working by himself in a windowless office inside the station's studios. It wasn't a very big space - there was just enough room for the dozen or so reporters, writers and newsreaders J.J. used to have under his command.

But cutbacks had left J.J. a commander with virtually no troops. Empty, the room felt enormous.

In the past, C-FUN sent its own staff reporters out to cover stories. The station used high-quality audio lines to link the newsroom to bureaus at city hall, the police station and the courts.

Now, the lines had been disconnected as part of a cost-cutting campaign by station management. Reporters had been laid off and bureaus had been closed for the same reason. C-FUN had no full-time reporters to develop original stories. J.J. was getting his stories second-hand off the wire.

Jobs in radio news began to get scarce toward the end of the 1980s. As stations entered the '90s, there were more and more layoffs and cutbacks, fuelled by a recession that saw radio ad revenue drop like a rock. Station managers started to look for places to cut costs, and they started with the news departments.

Newsrooms in music-oriented stations like C-FUN were the first to be affected. But by the time the 1990s arrived, every radio news organization had felt the pinch.

Canada once had no fewer than six competing national radio news services, including CBC radio's internal Info Tape. The Broadcast News service of Canadian Press was competing with hungry rivals like News-Radio and Standard Broadcast News. There were also regional services like Selkirk News and the Western Information Network (WIN) operated by CKNW. Even the Moffat chain of bubble-gum rock 'n' roll stations ran their own Contemporary News service.

Now, not counting CBC Info Tape, we have exactly two radio news services: Broadcast News (which now supplies the national and international news used by NW's WIN) and the financially strapped Standard Broadcast News service, which functions as an appendix to the program

used to have no fewer than eight functioning radio newsrooms. CHQM, CJOR, CKWX, C-FUN, CKLG, CKO, CBC and CKNW all had reporters on the street. A decade ago, a news event of any note would attract a forest of radio microphones with attached mike flashes to display the station call letters in newspaper photos and television footage.

Now, only CBC and CKNW field enough reporters to do original work. The other stations are operating with barely enough people to read stories off the Broadcst News wire.

At stations like CHQM, CKWX and CHRX, radio deskers (editors) will sometimes double as reporters by taking a tape machine to a news conference. The stations may even have a few part-time contract reporters. But they have no full-time journalists covering important beats like city hall.

While it may seem that there isn't much to mourn about the breakdown of a newsroom at a music station, the fact is C-FUN and stations like it provided competition that kept the more respectable radio news outlets honest. They also offered a real alternative to listeners by generating their own stories rather than regurgitating the same generic wire copy.

Though radio reporters at most stations are rarely the stars their television colleagues are, or the agenda-setters newspaper and magazine journalists can be, they still exert a measure of influence over their print and television counterparts, who will often monitor radio stations for coverage of fast-breaking stories.

And the best radio reporters - people like CKNW's George Garrett or CBC's Terry Donnelly - transcend the limits of the medium with stories that rival print and television in terms of impact.

In fact, some of the best reporters in the more prestigious media began their careers in radio - people like The Sun's Phil Needham, CBC television anchor Gloria Macarenko and Marlaina Gayle, the Province's consumer affairs reporter, to name a few.

These days (with the exception of CBC and CKNW) a career in radio news looks less like a stepping stone to better things than it does an occupational dead end.

Examples abound: there's the news announcer who explodes in a foul-mouthed tirade when a friend asks him innocently how he likes his new job - his fourth in two years.

There's the radio reporter who has a nervous habit of flashing his passport to embarrassed colleagues on the beat. One day, he insists, he's going to leave this rat race behind and move to . He's been working in radio for 17 years, and all he can find are part-time, fill-in jobs.

And there is J.J. Richards, alone in his newsroom - a news director with nothing to direct

Here is the response:

J.J. Richards, news and public affairs director at CFUN and QM-FM radio, is furious with us over an article about radio news (Radio microphones dead on the street, by Dan Ferguson) that ran in this space recently. So we've given him space to make his rebuttal. Here it is.

I don't know what Dan Ferguson has been smoking, but when he calls me a news director with no troops to direct, my 11 full-time news people and two part-timers take great exception to being branded as invisible. I'm proud of my staff. They are all seasoned professionals with long and distinguished careers.

We have the only "living sports legend" in Annis Stukus. This is the man who created the B.C. Lions, the Eskimos and the "three stooges" style of anchor positions: news anchor, weather person and sportscaster on the same set at the same time. Stuke invented color commentary in sports, first on radio, then TV. He's in the Canadian Sports Hall of Fame, not once but twice, and he was recently inducted into the Canadian Association of Broadcasters Hall of Fame. His accomplishments and contributions to broadcasting and the community would easily fill this page.

B.R. Bradbury, CFUN's morning news anchor, has been with us over 10 years and his background includes a distinguished career in , and . He has the awards to prove it, too.

John Hadley is our morning anchor on QM-FM. John is a lawyer, having been admitted to the bar some eight years ago. Although John prefers broadcasting to law, name another newsroom in the country with a full-fledged lawyer as a newscaster.

David Palmer is our afternoon anchor on CFUN. He has been in the broadcast business for over 20 years and brings an additional talent to our operation, in that he's an ordained minister.

Greg Cameron (Stephens) is our morning sportscaster on both CFUN and QM-FM. He has worked in this market for 15 years and knows the community very well. Greg is also a musician and former choirmaster at one of the Lower Mainland's Anglican churches.

Kathy Danford, our afternoon anchor on QM-FM, has been with CFUN/QM-FM's parent company, CHUM, for 20 years. Along with her news casting, she has developed a reputation as a medical specialist in the media.

David Marnoch had been with the QM organization for seven years when CFUN bought it two years ago. He's a weekday reporter and weekend anchor with a smooth style and an understanding of the QM-FM audience.

Norm Byatt is CFUN's weekend anchor. He's the former news director of the CKO All News Network and his broad experience allows him to slide easily into any post position on CFUN or QM-FM.

Terri Theodore has been a co-host on QM-FM; she anchors the news on QM-FM and covers the police beat. Her nine years in the industry have given her a broad understanding of a changing society and allow her to make a considerable contribution to QM-FM's special information programming. Marian Dodd is QM-FM's entertainment editor, the only full-time broadcast entertainment reporter in . She's also the Canadian West Coast reporter for the highly rated TV show Entertainment Tonight.

Our two part-timers enjoy individual reputations of their own. Jaylene Larose, who co-hosts the CFUN morning shows on weekends and covers the morning traffic beat, has been in this market for the last 10 years. When not broadcasting, she can be seen in many of the movies being shot in the Lower Mainland.

Mannie Buzunis hosts and produces the People's on QM-FM on Sunday nights. He's the former news director of CKY Winnipeg and fills in on weekends at CFUN or QM-FM.

We have the only full-time weatherman on staff. We call him Satellite Barry and he is not only an accurate weather forecaster, he has become an integral part of the morning show on CFUN.

Then there's me. I've been in this broadcast business for 40 years: Radio in , , , , and ; television in , with both CTV and CBC, and as foreign correspondent in .

If you melted down all of the news awards and trophies won by B.R. Bradbury, Stuke, the rest of the crew and me, you could paper your rumpus room walls with silver.

The article that sparked this angry rebuttal was written, I can only assume, to illustrate how dramatically radio news coverage has changed in the past decade and a half. It may have changed, but it hasn't died, it has just shifted gears, matured and become more consumer-oriented.

bemoaned the fact that there are not as many radio microphones at city hall, the police station and at the scene of the crime as there once were. For once he's right. But it doesn't mean they've died and gone to radio news heaven.

You won't find CFUN or QM-FM at the scene of two car accidents, but you'll hear about them on our traffic reports, especially if they affect your daily commute.

You'll find our microphones at the Aquarium, the museum, the art gallery, at plays, movies and exhibitions. You'll hear stories on medical breakthroughs, interviews with the physicians and researchers, stories on the decision-makers in business news, science, technology and any other aspect of society that affects us.

Sure there have been cutbacks in radio newsrooms in the past decade and a half. Why should we be exempt from the ravages of recession, downsizing and cost-efficient operations? But what we lose on one side we gain on another. says we lost the live broadcast lines from the bureaus. We replaced broadcast lines with cellular phones, which are far more efficient, mobile and considerably less expensive. Most important, the link to the on-air facility goes with reporters, rather than reporters being forced to bring the subject to the microphone.

Today's radio reporters have become more versatile and better equipped to meet the challenges of news reporting. And what we once did with 22 people in 1981, we now do with half, but we do it better and more efficiently. Radio news has grown up, and discriminating listeners are the better for it. If you doubt me, you'll find a variety of choices on your radio dial. Under my jurisdiction alone you have a choice of 14 CFUN on your AM dial or QM-FM at 103.5 on your FM dial.

If The Sun ever wants to do a real story on the current state of radio news, I'll be glad to talk to them.