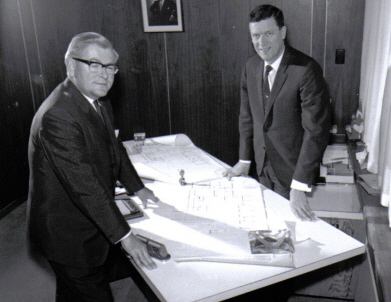 Born in , Hughes was educated in local schools. He had always wanted to be on the radio having heard the signals from downtown for many years. Bill said he liked to pretend having a microphone in his hand when he was kid and often went into the bathroom to practice his hockey game voice. His mother thought be was mentally disturbed. At 19 he was told to get a job in the interior so CJAT Trail hired Hughes briefly before CKWX brought him to the lower mainland.

One year later he was back in the on . At 21, Bill Hughes was on CKNW and reading the news and doing programs as well. In about 4 years, station owner Bill Rea asked him to fill in on the Roving Mike. “Good morning, friends, this is Bill Hughes”. That crackly sound was to be heard over the wireless 15,083 times before Hughes signed off and retired in 1994.
One day a passenger heading for gave his name to Roving Mike and the police heard the broadcast. He was wanted for a “stick up” and was making his escape. The police picked up the robber when the bus stopped in .

Hughes ran the No. 1 station for 14 years as general manager selling off his 6% ownership shares at 4 million dollars in 1970. The man who bought CKNW in the fifties, Frank Griffiths, knew raw talent and paid well and let Hughes run his business.

He was active in the Rotary Club where he once taped shows in for broadcast in . He was instrumental in getting built in . The family library is named after him. He was an executive Vice-President of parent company Western Broadcasting Ltd. He ran the Canucks hockey team for 9 years as CEO and served on the NHL Board of Governors.
Even though some poke fun at Bill Hughes as one of the icons of west coast broadcasting, he was loved and appreciated by many. When he was sick recently, he received boxes of letters and cards wishing him well.
His wife Dorothy is glad he is not riding the buses anymore.

Bill Hughes started in broadcasting at a station in Trail, CJAT, in 1945. He had, he recalls, a pretty good voice except for this one thing: It drawled a little, long enough to sell commercials between each word. But he did everything, from signing the station on in the morning to writing commercials and working in the record library. That, he says, is the only way to learn any business. He slept in on VE Day and the citizens of Trail learned about it two hours later. His name was mud for a while but he talked his way around it. When VJ day rolled around, he left for Vancouver. He worked for CKWX until CKNW offered him a little more money, $130 a month.

CKNW in the early ‘50’s was an exciting place to be, especially for a hard worker such as Hughes. He got along well with the owner, Bill Rae. Then a funny thing happened that took Bill Hughes out of the ranks of faceless deejays and made him an executive.

“I’ll tell you what happened,” Hughes is saying from that 19th-floor corner office. “Bill was hot to get into television and he wanted a new station general manager. He brought in one of those industrial psychological testing outfits to take a look at people senior to me that he had in mind for the job. But the tester needs a median, somebody to measure these guys against. So Bill says, “I got this real bastard down in the basement who’s into everything.” Well, I take the test and the tester reports back to Bill: “There’s one guy here who’s got it over all the others. What the hell’s he doing down in the basement?”

At 29, he was the youngest general manager of a major Canadian radio station. That was 1954. Two years later, Frank Griffiths, the accountant who is now head of Western Broadcasting, and Walter Owen, the lawyer who is now B.C. lieutenant-governor, guaranteed Hughes’ loan for $36,000 and the three bought CKNW from Bill Rae.

He tells a story about how his life might have been different had one of the bidders, the Southam publishing company, managed to buy CKNW at the time. “Southams just didn’t understand the radio business. One time we got a call from a guy, said we could get the Western Football Conference rights for a $10,000 telegram. So, naturally, I sent the telegram. A little while later, I get a call from the publisher of The Province. [At this time, in early 1956, Southam, which owns The Province, was awaiting approval of the Board of Broadcast Governors to co-purchase the station with the Griffiths group; permission was later withheld.] He tells me, “We don’t pay for sports coverage – we get paid for covering sports.” Well, in radio, you do pay. I tell you, I worked hard to see that Southams didn’t get that station. I just wouldn’t have had the same career.”

Hughes stayed on as general manager until 1970. “They were the most interesting 16 years of my life,” he says, motioning nostalgic enthusiasm. “You know, radio is a people business.”