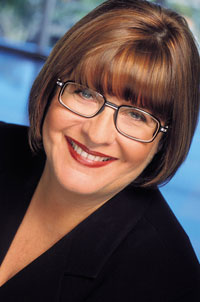 Vicki Gabereau is one of ’s best interviewers. With her sharp intellect, quick wit and genuine interest in people, Vicki has turned her television series, VICKI GABEREAU, into something more than just a “talk” show – it’s a daytime conversation show.

Now in it’s 8th season, CTV’s VICKI GABEREAU is a Canadian standard for quality and Vicki herself is a national celebrity. With two Leo awards in 2004 for Best Talk Show and Best Host In A Talk Series, added to her list of accomplishments, awards and recognition that include four previous Leo awards, three Actra awards and multiple Gemini nominations, Vicki and her show are at the top of their class. Each day, across the country, her audience tunes in to spend time with Vicki and her high profile, entertaining and informative guests.

Vicki’s own background is so filled with adventure, intrigue and risk-taking that she’d make a great guest for her own show! Growing up in , Vicki Filion had become a neighbourhood character by the age of 8. At age 18, Vicki moved to to go to school and moved in with the family of her father’s best friend, Pierre Berton. In , she met and married a French magician named Michel Gabereau, and had two children by the time she was 23.

Her unbridled enthusiasm and inquisitiveness led her through a series of jobs which included driving a cab, delivering elephants to and working as a professional clown. In fact, it was her role as “Rosie Sunrise,” a member of a clown troupe called Puck-Rent-A-Fool that lead to her minor celebrity status as a mayoralty candidate in ’s 1974 municipal election. She lost to David Crombie by 177,000 votes but the campaign had raised her profile. She turned that awareness into her first job in radio broadcasting as a fill in for a talk show at a small radio station in .

Then she set her sights on a position at CBC, gaining entry with a job in archives. Vicki received her own show as host of CBC Radio’s Variety Tonight in 1981, starting in and moving to . In 1985, the format was changed and the 2 hour long afternoon interview program Gabereau was born. The show lasted 12 years (1986 – 1997) and established Vicki as the master of the long-format interview. Her guests liked being on the show and her audience loved her. She had achieved what she set out to do. More than 15,000 interviews later, it was time for a change.

In September 1997, she made the leap to television as host of Gabereau Live! - a live variety/talk show broadcast from . The move was a challenge for the veteran radio broadcaster and scared her, which, she says, is exactly what she wanted. Guests on the show range from stars to Nobel Prize winners, from cookbook authors to one of Vicki’s ‘pet’ segments - “Dog of the Week. The risk paid off – CTV’s VICKI GABEREAU is now entering its 8th season.

Vicki currently lives in with her companion Tom Rowe. She is the author of This Won’t Hurt A Bit - her autobiography, as well as Cooking Without Looking - a smorgasbord of recipes by her CBC listeners. For ten years she has been a board member of the Governor General Performing Arts Awards Foundation. She holds Honourary Doctorates from and . She is the Honourary Fundraising Chair for the Parkinson Society and a board member of the Raymon John Hnatyshyn Foundation. But on , she gained the most important title to her – grandmother, to baby Lucas Arthur Corin Burnett.

The Life and Times of Vicki Gabereau

"'s motor mouth", "the chat Queen," "the Princess of gab," "the Grand Dame of foot-in-mouth" - she's none other than Vicki Gabereau!  She spent more than 20 years on CBC Radio - interviewing everyone who was anyone, she's written two books, has her own national television show, and recently made an unexpected trip into the Jungles of the Peruvian Amazon.  Life and Times takes a look at the irrepressible person behind the mouth.

Not one to take the easy path in life, she dropped out of high school two credits short, got married before she was 20, had two kids by the time she was 23, drove a cab, slung beer, and ran for Mayor of Toronto - all before she turned 30.

Gabereau grew up in in the 1950's surrounded by media personalities.  Her father worked as a photographer for the Sun and often complimented the words of his best friend Pierre Berton with his photographs.  Although she was very bright, school for Gabereau was a challenge.  Her inability to concentrate mystified her teachers and her parents.  It was her first husband Michel Gabereau, a lion tamer with the circus when they first met, who encouraged Vicki towards a career in the media.

"I sort of had it in my mind that I'd like to be an announcer on the radio. Once, I read the news at CBC Edmonton, and the guy called me in and said, "never again are you reading the news.  I don't care if we have to drag someone in off the street or I do it.  You are never doing it again, you were awful!,"" says Gabereau.  It didn't take long before she was the backfill host for Don Harron on CBC Radio's Morningside.

"I was apoplectic, I was looking for a bus to run me over on my way to work that day," said Gabereau, recalling her first day on Morningside.  After 22 years with CBC Radio, three Actra awards and more than 5,000 interviews, Gabereau's new home is in front of a live television audience on her very own hour-long interview/talk show for CTV.

Vicki Frances Gabereau (born 1946) is a Canadian radio and television personality. Most recently she hosted an eponmously titled afternoon talk show on CTV Television Network, which wrapped up production on .

Born Vicki Filion in , Gabereau moved to at age 18 for university. In , she married Michel Gabereau and worked a variety of jobs, including as a professional clown. In that capacity, she ran for Mayor of Toronto in 1974 under the pseudonym Rosie Sunrise.

She then worked in radio, hosting her first talk show for a station in . She later joined the CBC as an archivist, and became host of that network's Variety Tonight in 1981.

In 1985, she became host of Gabereau, a two-hour daily interview show on CBC Radio. She stayed with the CBC until 1997, when she moved to CTV. Her radio program was replaced by 's Roundup, hosted by Bill Richardson.

Gabereau has also published an autobiography, This Won't Hurt a Bit, and a cookbook collecting some of her favourite recipes sent in by her CBC radio listeners.