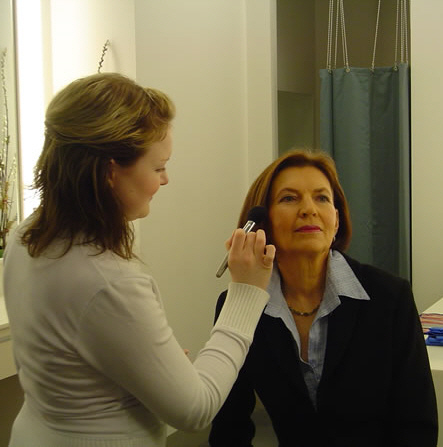 Fanny with make up artist Katie

Named one of the 25 most influential women in by Chatelaine magazine, Fanny Kiefer is

the host of Studio 4 on Shaw TV. She began her award-winning career in broadcasting in

25 years ago as a researcher/producer at CJOR Radio. Ms. Kiefer has worked in

of guests in the fields of arts, humanities, politics, entertainment and sports.

Flowers are all over the place in Shaw TV's Studio 4 and people keep coming up. "What a girl has to do to get some attention," says the TV host Fanny Kiefer, adding,"a Mercedes would be even better." She's talking about the massive cerebral aneurysm she had about four months ago and from which she's completely recovered without even having to rehabilitate, though half the people who suffer the severity of Kiefer's attack are no longer among us to talk about it. Kiefer is very much her old self, back to work as of last Tuesday and with no mental or physical damage --there isn't even a trace of a scalp incision to betray the titanium plate over her frontal lobe. And she's as talkative and charming as ever. The polite thing to say, and too many well-meaning people tend say it, is "How are you?" (strong emphasis on the "are.") And if you ever hear that "you're 'not a victim,' you're 'a survivor,'" you can be pretty sure that you're a victim of political correctness -- a victimization that's hard to survive in itself. But never mind -- Kiefer is just astounded to learn that she has "so many friends." She was out for dinner with a few of them at her pal Vicki Gabereau's house the night before it happened. Kiefer drove home afterwards, had a good night's sleep and went to work. Then she went to the gym and during a lat-pull heard an explosion in her head that she says sounded like a gun going off. Then she noticed that people seemed smaller and far away. Her trainer made her sit down, gave her an Advil and a soda and finally drove her to a clinic whose resident doctor thought she probably had a headache and advised her to go to emergency should things get worse. They got much worse. That evening Kiefer's good friend Nancy Morrison, the B.C. Supreme Court justice, telephoned for something and learned that Kiefer had an extremely severe

headache, was throwing up and didn't want to talk. That was was very strange and did not sound like Kiefer at all. Morrison called back early the next morning and heard a voice that was all but unrecognizable. “ knew that my talk button is always on. She could tell something was not right and went into red alert. She saved my neck," Kiefer says. "I knew I was in deep doo-doo." Morrison said that if Kiefer didn't get herself into hospital herself right away then she'd be in Kiefer's driveway in five minutes. One of Kiefer's daughters got her to General. "I was lucky. Every chip fell where it should have. The whole team came together and I got a great surgeon, Gary Redekop." She was in intensive care for only seven days -- a woman who'd only been in hospital twice before for the birth of her two daughters, Molly and Jennifer. Kiefer needs no introduction to anybody who's seen her show. She's a dream interviewer, a friendly intelligence who knows how to draw someone out without being fulsome or toadying. She likes a good discussion and can be tough without being overbearing. She has a lot in common with her tough-minded sorority. Gabereau and Morrison are equally durable and fun to be with, to say nothing of Carole Taylor, who visited Kiefer twice in hospital and brought her hand cream -- "and she was campaigning at the time." Not one to make a grim thing about the whole experience, Kiefer recalls the nine-year-old daughter of another friend saying "Fanny had a mannerism." All of her old boyfriends showed up at the hospital bed. "You gotta love that." And Umberto Menghi brought food. But you know it was darker than that. "I've never spent that much time with myself," she says in a rare moment of less than levity. "Life is about getting to death. We're all racing towards death but few of us believe it.” She anticipates the next question. "What did I learn from all this? To pull the stops out more. Not to edit myself as much. To be very clear on the difference between what you think youwant and what you really want." And cryptically, she says that after something like what she's been through, "You have a different energy; you're more vulnerable, which makes you braver. Your heart's more open." Many would say hers was always that. Earlier on the morning when we talked, she interviewed the social activist Patch Adams and asked him about the importance of "play." Verbally, Kiefer is a die-hard player.