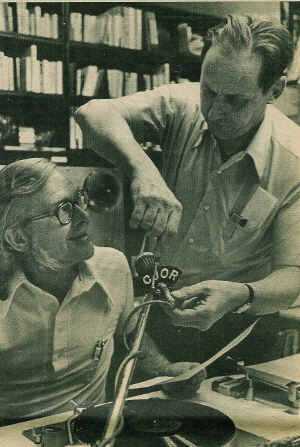 Al Erdman was the chief engineer at CJOR for 24 years, starting when the station operated out of the Empire Ballroom on Georgia Street in 1956, until just before they left the basement of the Grosvenor Hotel on Howe Street in the early 1980's. Previously, he had worked at the wired music provider, Muzak in Vancouver and the Saskatchewan Telephone Company in . He started as assistant to George Chandler, husband of then station owner Marie Chandler, and became the chief engineer when George's poor health caused him to retire a couple of years later. With the possible exception of Vic Waters, Al was 'OR's longest standing employee.

Personally, Al was known as the shy, soft-spoken, cigar- smoking, Pepsi-drinking, Bing Crosby-listening, slightly rumpled-looking fellow as much responsible for the "personality" of the station during the 60's and 70's as any one of the on-air staff.

Al could easily have been the inspiration for Peter Falk's . He always looked like an unmake bed, with his torn and tattered green suede suit and ubiquitous McCurdy Radio "lab" coat stuffed with bits of paper and other odds and ends. It wasn't unusual for him to reach into his pocket for a packet of matches and pull out a six month old, unopened pay packet. This predilection was well-known and staff member that may have had a bad run in with the ponies or the bottle would often come to "the Bank of Erdman" for a "loan". The money was rarely paid back and Al was too kindhearted to ever go after the culprit although he remembered the date and amount of every "touch".

Al was a longtime Bing Crosby fan and was rumoured to have the 3rd largest collection in the world. When he lived in his house on he had over 24,000 transcriptions, 78's, 45's, LP's, reel-to-reel tapes, cassettes, signed photographs, and magazine articles. He could remember the recording date, take, backup orchestra, alternate versions, and master numbers of almost everything in his collection.

Al was also a longtime radio amateur holding both the call signs VE7AFW, then VE7AFE, and finally VE7AL. He had thousands of DX and QSL cards and earned ARRL certificates in almost all categories. We was renowned for building some of the best sounding AM transmitters on the air, and carried an RF burn on his forehead and chin from one of his favourite, hyper-tuned, water-cooled creations. He taught Morse code classes for the local chapter of the Amateur Radio Relay League during the 50's and 60's.

In later years, Al caught the computer bug. He would go down to the Eaton's Centre at lunch time to experiment with the 4K Commodore PET. He bought a succession of computers - Commodore 16K PET, VIC 20, 64, 128, 128B, Amiga, and finally an HP Pavilion. He loved to program and his resistor colour-code program and 10 piece graphic dice programs were two that he was particularly proud of.

The story of how Al Erdman left CJOR is a sad one. During the technical out-sourcing that happened in the radio industry in during late 1970's many engineers were moved from local stations to a third-party contractor and then "leased" them back to the stations. Al's new employer needed an engineer for a contracted radio station in the northern city of and company management decided that Al was the man for the job. At 64 years of age and 24 years at the same radio station, Al was going to have to leave his friends, family, home, and the radio station that he loved. He refused the move and was fired. It broke his heart.

I worked as Al's assistant at CJOR from June 1974 to August 1980, but continued to stay in touch with him until he passed away. On-air personality John Wilson, Al and I used to get together for dinner once a month to talk about the things we all loved - music, radio, and computers.

Al Erdman was a remarkable man - a part of radio history - and a great friend. I miss him dearly.

Officer in the Fraternal Order of Eagles in .

Erdman invented line amplifiers in use at the time of his death. A friend Stan Davis, a well known broadcast engineer used Al’s designs in his installations. Al is revered by those who worked around him. He was a true character in a day before radio was totally modernized.
Al was single and left no immediate family. His estate left much to the SPARC museum of radio history in .

Memories of Al: I do remember that Al Erdman's was a ham operator VE7 AFE. He told me that he waited an extra few weeks before writing his exam, because the call letters were issued in alphabetical order, and he could see his initials were coming up. Someone at DOC must have tipped him off when the right time came up. Al started with CJOR in 1955. Something that a lot of people don't know is that much of the technical side of talk radio was born out of Al's brain at CJOR, as he grappled with problems that had never been adequately addressed.

Originally, the six second delay was built up by recording on the front Ampex in Master Control and playing back on the back unit. It so happened that the machines were six seconds apart (at 7.5 inches/second). Later Al built up the system of pulleys and wheels that allowed the use of just the front machine. The telephone hybrids that allowed speakerphone ease, but with broadcast quality, were all designed and built by Al.

When Stan Davis started manufacturing broadcast consoles, many of which are still gracing control rooms in BC's interior stations, each of those boards contained AFE 3 and AFE 10 line amplifiers... the AFE stands for Al Frank Erdman. When Burns moved his Hotline back to , he discovered just how hard it was to get a talk show going without Al's expertise, and he begged Al to move to . Ever generous with his time, Al instead spent many hours on the telephone with the engineers at the other end, offering advice and support.

Nowadays, the entire infrastructure of open line radio is available, purpose-built for the task, from broadcast suppliers... in CJOR's heyday, this was not possible. And a surprising amount of CJOR's electronic devives were conceived, designed, perfected and built by Al!