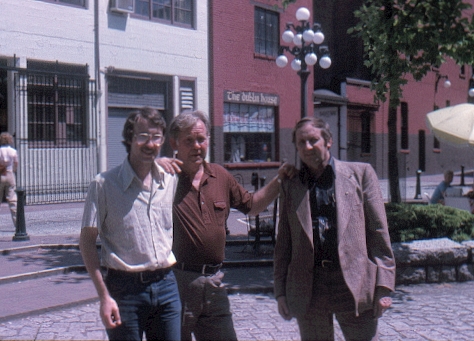 CJOR being one of the oldest radio stations on the west coast moved into studios in the basement of the Grosvenor Hotel on in 1930. For over fifty years the stations operated at the top of its game but the engineering was described as archaic to many with the walls full of spaghetti wiring that was not coded or properly documented. It was a nightmare when the station had a sound problem between studios.

Engineered for Arthur Helps and Town Hall Meetings and church services at Cathedral. The sound from these services was acclaimed in the broadcast world mixing the sound from seven microphones. He received an award for the utilization of a taped broadcast in 1948 from . The tape ran fast because of a glitch. (The electrical power ran at 50 cycles not the usual 60 cycles). The Award judges commented on the rapid fire commentary saying it was remarkable. This use of a delay tape system was noticed south of the border and the Bing Crosby show was then taped for later broadcast rather than being done live to air. Art was well known to horse race fans as engineer to Jack Short at .

Art was the brother and partner to George Chandler - the boss at CJOR for 36 years until 1962. At the time of George's death, Arthur and his two sisters battled with Marie Chandler for the company. They lost but CJOR moved into the hands of Jim Pattison after the BBG indicated they wanted a change in control.

Died at the age of 65 years

Wilbert Brockhouse Smith was born in Lethbridge, Alberta, graduated from in 1934 M.A.Sc (electrical engineering). He became engineer for radio station CJOR in .

Smith did much to encourage improvements in the technical side of broadcasting facilities in Canada, and helped form the Canadian Association of Broadcast Consultants, which often advised the federal Department of Transport (DOT) on frequency allocation and other technical matters. In 1939, he joined the DOT.  He was engaged in engineering 's war-time monitoring service and, in 1947, was in charge of establishing a network of ionospheric measurement stations, several of which were in isolated parts of the North.

At the time of his death, he was superintendent of Radio Regulations Engineering with the Department, responsible for the engineering aspects of all matters concerning the use of radio in Canada, including equipment standards, radio relay systems (micro-wave) and  broadcast facilities.

Much of the technical side of talk radio was born out of Al's brain at CJOR, as he grappled with problems that had never been adequately addressed. Originally, the six second delay was built up by recording on the front Ampex in Master Control, and playing back on the back unit.  It so happened that the machines were six seconds apart (at 7.5 inches/second).  Later Al built up the system of pulleys and wheels that allowed the use of just the front machine.

The telephone hybrids that allowed speakerphone ease, but with broadcast quality, were all designed and built by Al. When Stan Davis started manufacturing broadcast consoles, many of which are still gracing control rooms in BC's interior stations, each of those boards contained AFE 3 and AFE 10 line amplifiers. The AFE stands for Al Frank Erdman.

When Pat Burns moved his Hotline to , he discovered just how hard it was to get a talk show going without Al's expertise, and he begged Erdman to move to . Ever generous with his time, Al instead spent many hours on the telephone with the CKGM engineers offering advice and support.

Nowadays, the entire infrastructure of open line radio is available, purpose-built for the task, from broadcast suppliers... in CJOR's heyday, this was not possible.  And a surprising amount of CJOR's technical equipment was conceived, designed, perfected and built by Erdman.