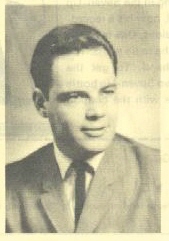 I can't neglect it, as it is the ultimately charmed song of my career. It took five days to develop, starting as a 'Paperback Writer' ripoff called 'White Collar Worker' that the Guess Who wouldn't do. Then I heard Vancouver DJ Darryl Burlingham saying 'This is Darryl B on CFOX* Radio and we're taking care of business' and thought it was a great line for a song.”

Longtime radio listeners will remember Daryl Burlingham, known on the air as Daryl B, for his many years on both CKLG and CFUN throughout the '60s and '70s.

Daryl has been in failing health for some time and has been convalescing in a Winnipeg hospital for the past few months, battling post-polio syndrome while nursing head injuries and a broken hip he suffered in an earlier fall.

Despite a bad prognosis, I'm told he appears to be on the mend. In fact, the 57-year- old former CKLG "Boss Jock" says it's his fondest wish to be in attendance for the closing ceremonies of the Pan-Am Games to see the reunion of his longtime musical pals The Guess Who.

It's been a hell of a week for broadcasters.

Still reeling from the sudden death of Rick Honey, the radio community was hit with a second jolt on Monday, with word of the passing of another longtime radio fixture, former CKLG Boss Jock, Daryl Burlingham, 58.

Blessed with an incredible voice and energy, Daryl B was long regarded as one of the greatest ever Canadian rock DJs and, as such, was idolized by scores of up-and-coming broadcasters during the era of Boss Radio.

While a dominant force and figure on the local airwaves from the mid '60s to the early '80s, Burlingham had been in failing health in recent years. Through his former colleague and good friend Honey, Daryl had been kept abreast of developments in the local radio scene and always looked forward to the news and words of encouragement he received.

Daryl was contacted last Sunday morning in Winnipeg and, when told of the death of Honey, burst into tears, saying what a wonderful person Rick was and how much he would be missed.

It appears the death hit Daryl particularly hard. The next morning, Daryl was found unconscious in his apartment. He had suffered a massive stroke and was in in a deep coma.

He was rushed to the emergency room at 's St. Boniface Hospital but passed away a short time later.

Daryl B first arrived in in 1965 after leaving 's CKY to take a job at CFUN.

He was hired by Red Robinson to replace the recently departed Fred Latremouille and became an instant hit with listeners.

"Daryl had a wonderful, warm voice," said Robinson. "He was a master DJ on the air and simply one of the best ever had."

If indeed there is a rock 'n' roll heaven, Rick and Daryl can now put together one hell of a radio station.