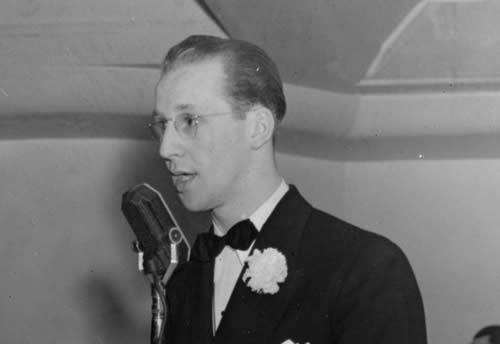 Memories of CJOR and some of the early years.

“I went to with Bernie Braden and Dorothy Street.…we went down to CJOR and for a very small sum of money we entertained an audience.  I played the tenor sax, the soon to be British star Mr. Braden sang and Dorothy was on the piano. There were a lot of 15 minute radio programs in those days and people with talent could readily get on the air.

My only recollection of station owner George Chandler was him walking around the station with a slide rule. He did not hire me and seemed not to be involved in the program side of the business. I think Don Laws took an active role in management. I remember the studios being arranged in a ‘T” shape with a news studio, a control room, and a main studio.

I remember in 1936 playing in the Wally Peters Group. The main studio in the Grosvenor Hotel would allow about 8 musicians to set up. At one point, the management established a studio on the other side of the street on Howe that could house a large orchestra. It was used in the 40’s and 50’s.

I gave Juliette her stage debut at the Orpheum at the age of 13 in June of 1940 - with “There will always be an .” She is doing well. I had lunch were her just a short time ago.

My orchestra played on both CBC networks – the Dominion Network and the Trans network. The networks provided needed work for artists in during difficult times.”

Today’s interview took place October 14/04 while Dal was at his desk. Mr. Richards is a very busy man with many calls coming in at the time of our discussion. He said he had 20 gigs lined up in the next month.