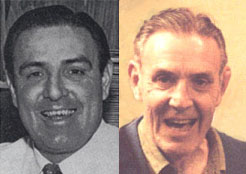 February 1/47 Winnipeg-born Bob Smith made his debut as host of the CBC radio show Hot Air. Virtually all the jazz recordings Bob played were from his own collection. He would host Hot Air out of the CBC’s Vancouver studios for 35 years. Hot Air—the host today is Paul Grant—is Canada’s longest-running radio program.

Bob Smith would host the show until 1982, when he left because of the onset of Parkinson’s disease. Paul tells us a series of staff announcers then hosted the show, including Harvey Dawes, Bruno Cimolai and Gordon Hunt, until he took over April 8, 1995.

Mr. Smith, who wrote for The Vancouver Sun's Leisure section for more than 20 years and spent more than 30 years behind a CBC microphone as host of Hot Air, was one of Vancouver's best-known show business figures.

"There wasn't anyone more knowledgeable of jazz and he was a great booster of local jazz artists," said Harvey Dawes, who hosted Hot Air for four years after Mr. Smith left the program because of illness.

Saxophonist Fraser MacPherson said Mr. Smith was well-liked and loved by all musicians. "He did a lot of good work for jazz and jazz musicians," he said.

Some 650 friends, musicians and listeners paid $25 a ticket last October to honor Mr. Smith, who since the onset of Parkinson's disease several years ago had been out of the public eye.

A Bob Smith Scholarship Fund for young jazz students was established at the event held at the Commodore.

Both Boyd and Sun assistant managing editor Alex MacGillivray had memories of Mr. Smith catching in the old Vancouver senior men's softball league, a cigar protruding through his catcher's mask.

"He was probably the number one jazz expert in town," MacGillivray said. "He was highly respected by all the musicians. . . He was a guy who had more enthusiasm for life than anybody I know."

Born in Winnipeg on Jan. 15, 1920, Mr. Smith moved to Vancouver seven years later. In a 1980 interview, Mr. Smith recalled that he heard his first jazz recording at the age of 13:

"My mother used to listen to a radio show called the British Empire Program on CKMO (now CFUN) and I heard a soundtrack recording from a Noel Coward play which featured a free-wheeling clarinet introduction. I was hooked from then on."

At King Edward high school, Mr. Smith wrote what he called a semi-gossip column for the school paper, the Blue and White, and played records during the noon hour. While he was still in high school, he sold CJOR on the idea of a jazz show featuring the big bands of Cab Calloway, Benny Goodman, Jimmy Lunceford, Cozy Cole and others. His show, Hilites, was heard 7-8 p.m. weeknights as early as 1937.

At the outset of the Second World War, Mr. Smith joined the Royal Canadian Air Force and later served with U.S. forces in the South Pacific. He returned home with an armload of American jazz records. Soon the jazz collection became famous and then-CBC-announcer Peter MacDonald began using the records on his afternoon show, later asking Mr. Smith to take over.

On Saturday, Feb. 1, 1947, Mr. Smith made his debut as host of Hot Air. The half-hour program became an hour long the following May.

As well, Mr. Smith did play-by-play of Canadian Football League games from Eastern Canada from 1952 to 1954. He said he never left the CKMO studios on Robson Street. Using wire copy, he ad-libbed the game and pushed the needle on and off a crowd-noise record. If the teletype broke down, Mr. Smith said he had a standby: "I'd always have a dog go out on the field."

Mr. Smith is survived by his wife, Deedee, and daughter, Georgia.

They came to the Commodore Sunday to pay homage to the man with the ordinary name and the extraordinary life.

Bob Smith means a lot to a lot of people. Some know him for his selfless work with the Kivan Boy's Club and the Boys Club Association. Some know him as the hard-playing softball catcher who could chomp a cigar and throw a runner out at second in the same motion.

But most know him as the voice of Vancouver jazz. Since the late 1930s, when the then-high school student first went on CJOR to spin some wild new 78s, Bob Smith has been instrumental in shaping this city's musical tastes. His CBC show Hot Air has been on the air since 1946, and he served as The Vancouver Sun's jazz columnist for a number of years beginning in 1954. That's a lot of notes under the bridge.

Some 650 friends, musicians and listeners paid $25 a ticket to honor Smith who, since the onset of Parkinson's disease several years ago, has been out of the public eye. With typical Smith modesty, the guest of honor arrived unannounced, parking his wheelchair at the back of the hall away from the microphones and spotlights.

All afternoon, a steady stream of well-wishers paid their respects, usually draping an arm around his shoulder.

And everyone who came had a testimonial:

"I used to listen to him when I was in high school in Victoria, around 1946-47," says saxophonist Fraser MacPherson. "It seems I've always listened to him."

Saxophonist Gavin Walker: "I just love the guy. He's one of the few people in the media that is passionate about the music. He would play something new and, in 30 seconds, tell you all about the record. He was always saying, 'Hey, this is good and I want to share it with you.' And he would always boost the local musicians."

Broadcaster Jack Cullen: "We shared a few microphones together, a few sips together, and a whole lot of music together."

Bandleader Dave Robbins: "He used to close his show with, 'God bless jazz fans everywhere.' Those were the sweetest words I've ever heard."

Vancouver lawyer Walley Lightbody said Sunday that when he and friend Joe Warnock began organizing the tribute three months ago, they were amazed at the response.

"We just started asking musicians," Lightbody said, "and everyone said they'd be happy to donate their time. Bob has given us so much, you know."

MacPherson, Robbins, Walker, and Lance Harrison all led various groups in a tribute to Smith, who listened intently to the music during the rare moments when friends weren't visiting his table.

Perhaps the greatest tribute, however, came from Lance Harrison, who dedicated his part of the program to "my best friend in jazz, in fact, my best friend ever, Bob Smith."

Money raised from the show will go towards establishing a Bob Smith Scholarship Fund for young jazz students, likely at Vancouver Community College.