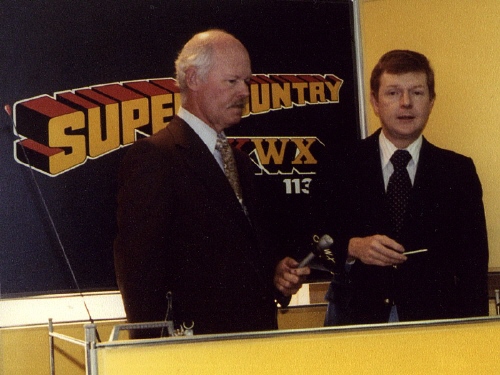 Bob Bye on left with Red*

Bob Bye - CKRM Regina; CKRC Winnipeg; CKCK Regina; CKWX Vancouver 1966-89; retired from radio after more than 50 years as an on-air personality and programmer, over 22 years of them at CKWX.  Died in at age 74

- Veteran country music announcer Bob Bye has passed away just short of his 75th birthday.  Bob died of a heart attack earlier this month at his home in .  He began his broadcasting career on the Prairies, in and but was best known for his many years, starting in 1966, at former country giant CKWX AM 1130 , where he retired in 1989.

Sadly, the ranks of radio's fallen comrades have added another name as one of 's most endearing personalities has died.

Veteran country music DJ Bob Bye, who for years was one of the city's most-liked and longest-serving personalities, was felled by a sudden heart attack at his home in earlier this month.

Though best known for his long association with CKWX, Bye was a veritable jack of all trades.

He was born in , in 1926 and began his broadcast career on the Prairies, holding a variety of radio gigs in both and before starting at 'WX in 1966. His affiliation with the country music giant was long and fruitful, not to mention profitable, as Bye's ability to convert a live commercial into corporate revenue was legendary.

In fact, around the hallways of CKWX, he was affectionately known as "The Endorser." As the sales staff learned, if Bob Bye pitches it, the listeners will run out and buy it.

"Bob was a wonderful man and a very special human being," said Peacock. "He had a connection with the audience and a charm that crossed all demographics. He had a genuine bond with his listeners and it wasn't done for the money. It was done because Bob Bye truly loved people."

Veteran broadcaster Elmer Tippe would know better than many. As a longtime broadcaster himself, Tippe worked alongside Bye at CKWX for years and speaks fondly of his former colleague and friend.

"Bob was one of the nicest men I ever knew," he said. "He was a great guy to work with and be around, and I can tell you that people loved him and listeners absolutely adored him. His request show was one of the biggest things ever on the air in and he was passionate about it. Bob was a real pro and I loved him dearly."

Aside from his many years as a popular CKWX DJ, Bye did much more, including a stint as a program director and hired another of the station's most endearing personalities: Jim Fraser.

"I liked him right away because he hired me," said Fraser, but my affection for him went a lot further because he was such a nice man and we became good friends over the years.

"He was a very casual guy and extremely easy-going. He had a great sense of humour and reminded me a lot of my own father."

Away from the public side of the man, there was family.

Bye and his wife Frankie celebrated their 50th wedding anniversary last month and, after retiring from CKWX in 1989, enjoyed his final years in with a winter home in .

When the definitive book on radio is written, Bye will be acknowledged and applauded for having represented a style of broadcaster rarely seen in the current era of radio personality.

Bye would have celebrated his 75th birthday tomorrow.

To quote the words of a timeless country standard, we fondly say, "Happy trails to you, Bob."

*The picture above courtesy of www.redrobinson.com