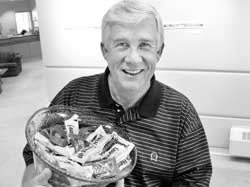 Bill Coombes, president of Fraser Valley Radio Group of B.C., co- chairs a special team formed in 1993 by the federal government and the Canadian broadcast industry to pilot the Canadian roll-out of digital radio.

Retired from broadcasting now promoter of Candyland Project in Chilliwack

Bill Coombes succeeded Barkman as President of the company.

Rogers Broadcasting Limited announced (1999) that it has entered into an agreement to acquire the Fraser Valley Radio Group which has stations in Chilliwack (CHWK-AM/CKSR-FM), Hope (CKGO-AM), and Abbotsford (CKMA-AM). The AM radio stations are focussed on specific communities, while the FM station (STAR-FM) has three transmitters that provide coverage to over two million people. The acquisition will require CRTC approval.

“I have watched for many years with great respect the operations of Rogers Broadcasting and we believe that this sale will enable our vision for these stations to be fulfilled,'' said Bill Coombes, President, Fraser Valley Radio Group.

The glitzy early a.m. premier of Star FM and its new morning man, 's Rick Honey, was on.

From now on, you can hear the former drive-time host on CKNW on Star FM 104.9 in the morning.

Honey, who will be joined by Kerry Grace on the morning show, says entertaining is in his blood.

"I've always been a morning kind of guy and I love doing morning shows," Honey said. "I love to make people laugh."

Honey's father in used to be a policeman by day and a stage entertainer by night.

Rick carried on the show biz tradition by going into radio. The resident worked as an announcer on the Prairies and in and the Maritimes before coming to as a Boss Jock on the old CKLG-AM.

He then performed his afternoon gig at CKNW for 24 years.

Honey said breakfast shows have the biggest impact on a station's success and he's excited about Star-FM's plans.

"We will bring fun back into radio programming," said Honey.

Star-FM recently launched a Lower Mainland FM network that gives it the largest service area of any radio station in B.C.

The station's new transmitter, located on , gives the station coverage of the entire Lower Mainland and its two million people.

"The combined coverage of transmitters in , Abbotsford and will mean the station will be heard in quality stereo FM from to Hope," said Fraser Valley Radio Group president Bill Coombes.

Under an agreement, U News at Six and Star-FM will share stories from their reporting staffs in , and the .

U. TV anchors Suzette Meyers and Russ Froese will broadcast hourly news updates on Star-FM weekday afternoons, culminating with STAR's simulcast of the first twenty minutes of U News at Six.

While Fraser Valley Broadcasters President Bill Coombescould not be reached for comment, word filtering out of Star-FM is that Morning Host Rick Honey, the high profile hire lastfall, will be leaving the station by the end of October and thatStar-FM, which had been hoping to make inroads in theVancouver market, will revert to its roots; broadcasting to thesmaller markets of the BC lower mainland...  (July)

RICK HONEY, the former CKNW broadcaster, began 11 months of a three-year contract with Bill Coombes' STAR-FM in 1997 by vowing to bring the station into metro . Broadcasting has since acquired STAR-FM and turned it into alternative-rock station Xfm. But Honey has kept his promise -- sort of. His suit against Coombes for misprepresentation and wrongful dismissal will be tried Monday in B.C. Supreme Court. Right downtown.

When Rick Honey took over the morning show at Abbotsford's STAR- FM last year, it was supposed to be for a term of three years. But for reasons unknown the deal soon soured and now the deliberations appear to be moving from the boardroom to the courtroom.

Honey claims he was unfairly terminated in July and has filed suit for breach of contract.

And a sweet contract indeed, with generous dollars, ratings bonuses, sales incentives, a car allowance and even a percentage of the contract's value to be used for a retirement fund.

STAR-FM president Bill Coombes says, "As far as we're concerned, we believe we've fulfilled all of our obligations and commitments to Rick and we're surprised that he's decided to go this route."

Honey, 52, was hired by Star-FM to do the morning show for a fixed three-year term but was terminated after 11 months. He claimed breach of contract.

Honey claimed co-defendants William Coombes and Broadcasters made false representations to induce him to enter into the employment agreement.

He also claimed Star-FM told him to ignore the three-month termination clause provisions of the contract agreement.

The station had been given approval to put a transmitter on , which would allow full access to the radio market.