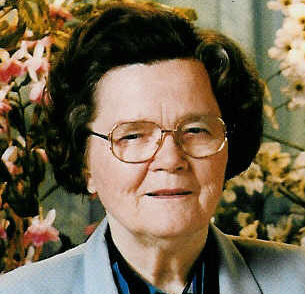 In 1982 I became one of the founders, and the Executive Director for , of the International Christian Embassy in . Our first Chairman is the Reverend Bernice Gerard of , B.C. where headquarters was established, until we moved family and headquarters to in 1983.

"Canadian Friends" now has several thousand members and Chapters in twelve major cities, with a national Board of Directors of which Reverend Bernice Gerard is Chairperson.

Bernice Gerard, evangelist, broadcaster, Pacific Academy co-founder and member of the Christian Info Society board, is a institution. After contracting a viral infection which placed her in hospital for six weeks, Gerard announced November 25 her decision to cancel her KARI radio show, and put plans to work with a new local Christian television station on hold while she regains her strength.

As part of our series honouring elders in the faith, Gerard shares her story with BCCN's Meg Johnstone . A complete life story can be found in her autobiography: Bernice Gerard: Today and for Life.

Meg Johnstone: Tell us about your early life.

Bernice Gerard: I was adopted as a baby by a Mrs. Gerard ... a full-blooded Canadian Indian. She didn't live very long. I vaguely remember looking down at the coffin ... One of our neighbours said "Look at your mother, this is the last time you're going to see her."

The Gerards were very rough-and-ready and drank a lot. It's the story of an unfortunate childhood -- I could make a good story about being a neglected, abused child. I just know that early, early on I was aware that there had to be more to life than what I could see right there ...

When I was 12 years of age, some people came preaching at the country schoolhouse. On the first hearing of the gospel, I wanted to be one of them. I wasn't sure if there was a God, would he have me anyway. But my heart said yes from the first intimation of the Gospel. The simple Gospel made such an impact on me.

One reason I have such confidence in the simple gospel as given on TV or radio is because of what it did for me as a child. They told me there was one whose name was Jesus who took little children up in his arms and blessed them. He was totally loving and kind. I didn't really know any men that were like that ... I gave my life to the Lord by standing up. I found myself in tears and didn't really know why.

Then the crisis came at home -- my adoptive father and brothers thought it was quite a joke that I had stood up in the meeting. The preacher reported to the authorities that I was in a neglected home, and I became a charge of the Children's Aid in .

MJ: Describe your early years of traveling and speaking ministry.

BG: While teaching in Rossland, I fell in with Velma and Jean McCall. We traveled to , , and then to , and preached ... We were evangelizing for 14 years in the States, , and ... We landed back here ... and planted Fraserview Assembly.

We didn't really know what we were doing, we didn't have a church-planting theory that we were following. We were evangelists . . . We had quite a bit of church-planting experience in the and . In , we brought our tent, which seated about 1,000, into a neighbourhood, and then the mother church cooperated to develop a full congregation, which we did. It was an unusual kind of life, and really quite interesting. We enjoyed fishing like that.

MJ: Did you have a tough go of it, working as a woman in positions that were largely male roles?

BG: Not really, all the years that we were travelling, we were a trio, and we were evangelists. As long as you could somehow drum up a crowd and see a few decisions for the Lord, the pastors were happy. They would have let a pink elephant stand in the pulpit, male or female, if it would bring in some new people and help to grow the church. A few times you'd run into some prejudice ...

MJ: How did the decision to become an alderman on Council come about?

BG: I had mixed interests. I was involved in the chaplaincy at UBC with Pentecostal Assemblies. I was concerned that they were always quoting unbelievers in the newspapers, people like Harry Rankin, who was quite well known, and very colorful ...

I was stirred with the thought scripturally that we should carry our Christian witness beyond the church's four walls. Because we participate with the Incarnation ... we can serve God in a very effective way if we move out and rub shoulders with people that we normally wouldn't be talking with at all. I still feel strongly about that, that church people spend too much time taking care of their individual selves ... I really appreciate the fact that right now we have more Christian input in politics, more of a challenge from the Christian side.

BG: I protested the takeover of part of the beaches [Spanish Banks to Point Grey at the west boundary of Shaughnessy Golf Course] by the nudists. Allan Garr, one of the broadcasters on CJOR, stood up in the Alderman's Lounge ... and challenged me that he would meet me on the beach in the nude. If I would, he would. And I was so embarrassed, I just fled the scene. I got out the door as fast as I could, because they were out to have all the fun they could possibly manage.

This thing still simmers. For years, in August they would call me and say, "Well, what do you think now? You didn't stop it did you?" ... It was a joke, in a way, and then in a way it wasn't funny, because it was part of a cultural revolution.

MJ: Where do you see hope in the cultural battle?

BG: We may see a great turn-around ... I've never felt that we have to win, but we have to stand up ... Biblically, we're given an opportunity to act and give our witness, but we don't guarantee that we have to be successful. I feel strongly that we need to take our place in the community and do whatever we have to to witness, let our light shine.

MJ: Many people remember Bernice Gerard for your distinctively lower voice. Has that had any bearing on your ministry?

BG: Well, actually, I've lately had a problem. I don't know whether it's an allergy or whether it's part of a Parkinson's that I have. It may be that it will pass away. I've always had a low voice, but it hasn't been as low as it is now ... I haven't been sick most of my life, and to be suddenly told by the doctors four years ago that I have Parkinson's is a recent disappointment. So, Pope John Paul manages, and Janet Reno has Parkinson's and manages to be the Attorney General in the ... I think I've done extremely well so far. Generally my low voice has been an asset ...

MJ: Your Sunday Line program had the highest overall average audience on Vision TV, but there has been talk of the program ending. What is happening, and is it related to your health?

BG: We did not renew our contract with Vision TV. This was a difficult decision, because it was a beautiful moment for us each Sunday night to be all across . We are not quitting, but we are not going on with cross-Canada TV. We are down-sizing our workload.It was with great regret we made this decision. We've been on TV for 21 years.

Velma [Chapman] and I both decided it was wise to downsize, both because of our health and our age. Wisdom would say to slow down a bit. We are looking forward to participation with a new Christian station in the future.