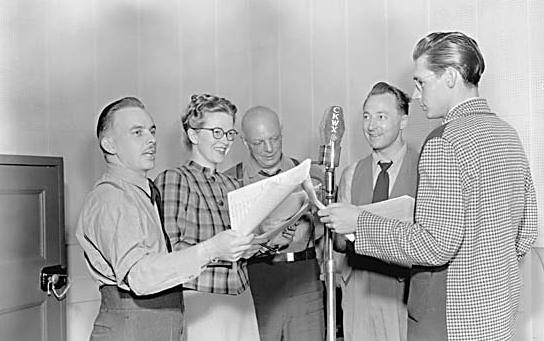 He was born April 25, 1910 in Harrogate, Eng. He led bands in the 1930s in Vancouver nightspots like the Alma Academy, Happyland, Cinderella Ballroom, the Quadra Club, Mandarin Gardens, Odyssey Room and The Narrows. He performed in musicals in the 1940s, and spent 12 years with Theatre Under the Stars. Accompanied by his wife, singer Thora Anders (b. Sept. 12, 1913, Victoria), he played radio and TV (such as a Juliette special with Robert Goulet), nightclubs and concert halls. He was with us for a long time. From Page One of the Ubyssey of November 22, 1932: “Wednesday afternoon the Pep Club under Gordie Hilker and Lyle Stewart will ring the bell once again when they present for the entertainment of the students Barney Potts and his orchestra, undoubtedly the peppiest aggregation of rhythm-dispensers in British Columbia.”  In 1955, he was the MC of "Hotel Downbeat" on CBC Radio with Lance Harrison and Don Franks. He hosted a CBC television children's show in 1958 called "Barney's Gang". In 1980, at the age of 70, he released an album titled Barney Potts, Live—Just Barely.