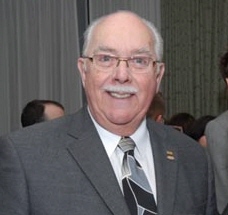 In a profession notorious for people being here today and gone tomorrow, Walsh will be recognized for 43 years of outstanding and continued excellence in broadcasting.

Walsh said the award was unexpected but “a tremendous thrill.” He is pleased, he said, to attend the awards ceremony in the company of other respected broadcast honorees: reporter George Garrett, broadcaster J.J. Richards, and Keith Bradbury, former vice-president and news director of BCTV.

“The real satisfaction, however,” Walsh indicated, “has been over 40 years of associating with many wonderful people in a business which I continue to find exciting and satisfying.”

Walsh will be accompanied by his wife Beatrice, who, he said, deserves her own award for raising six children while married to someone working a radio newsman’s hours.

Born and raised in , Walsh got his start with a 50-watt radio station in , Ont., after his thoughts turned to broadcasting in high school.

After taking a part-time student job in an advertising firm to help out his family, his resonant voice and well-paced delivery got him noticed, and a number of radio and television people suggested on-air work.

“I sent an audition tape to CKSF (now CJSS) in and was hired. I did all kinds of jobs, from selling advertising to announcing news to spinning discs,” he said. “It was a great place to learn the ropes.” He felt at home right away and soon gravitated to news writing and reporting, as well as announcing.

By this time, Walsh and Beatrice had married. A year later, they moved to Sault Ste. Marie, and Walsh went to work for CJIC. By the next year, he was working for CFRA in .

With his sights set on returning to , Walsh made a couple of trips to check out radio opportunities. In 1954 he was hired by CJAD as a news announcer during the week and a disc jockey on weekends. Although he spoke Italian only phonetically, he hosted a radio show for an Italian audience which proved to be quite a hit.

Over the next 15 years, six children were born to Andy and Beatrice, but his busy six-days-a-week schedule was hard on family life and he began to again look around.

After Beatrice spotted an ad in the newspaper for a news announcer, Walsh recorded his next five-minute newscast and rushed the demo tape to Maurice Foisy at CHQM. Who was impressed and called him immediately to ask when he could start.

Within a short time, the family relocated to and Walsh found a home at QM for the next 25 years. Six months after joining the company he became news director. His long and happy association with the station ended only after it changed management.

Walsh took some time off for health reasons but found that he missed the exciting world of breaking news, so he accepted an offer from Radio 1040.

In the mid-90s, CKWX News 1130 went to a 24-hour news format and Walsh joined the team. Today, he said, he usually works a part-time schedule which leaves time for volunteering and family life. Highlights of his career, have been working closely with Archbishop James Carney during the visit of Mother Teresa and being chosen as the announcer for the B.C. Place Stadium visit of Pope John Paul II in 1984. (BC Catholic Magazine 2004)

From Joe Leary at the Province:

Andy Walsh has been recognized for his years of distinguished radio service with a lifetime achievement award presented by the Radio Television News Directors Association.

At the stately age of 72, the News 1130 anchor and former AM 1320 host is an all-too rare example of broadcast class.

Born and raised in , Walsh embarked on his career in 1951 at a 50-watt radio station in , Ont., after realizing the broadcast bug had bitten years earlier while listening to Montreal Canadians hockey games as a kid.

"Back in the '40s, way before TV, I would listen to Doug Smith doing the play-by-play and realized that radio was something I would like to try," says Walsh. "I got into the business at 18 or 19. I had worked in an advertising agency with a number of former broadcasters who had often mentioned that I had a good voice and should look into radio."

Sheer humility prevents Walsh from offering a more accurate description of that voice, but trust me: As far as a set of broadcast pipes go, Walsh possesses one of the smoothest and most mellifluous in the industry. In fact, it could be said that when Andy Walsh speaks, the words lie in state.

In a business where egos are often out of control -- and there are several glowing examples in this city -- Andy Walsh stands alone, and remains a glowing example of what talented broadcasters should be like.