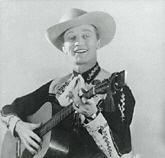 Jenny Gabruch in the Star on

Born in England, in 1910 he emigrated to Canada with his parents and six siblings settling on a ranch near Lloydminster, Alberta. Eric loved to sing and he had great encouragement from his piano-playing dad. It wasn’t very long until he had his own guitar and he began to hear a fellow named Wilf Carter singing over a radio station. Wilf became his hero, and like Wilf, he began to write songs himself. A friend who was going into the army gave him some of his shirts on which was stitched "Alberta Slim". They were the right fit and wore well. People began to call him "Alberta Slim". Eric Edwards became "Alberta Slim, the Yodelling Cowboy".

Times were tough during The Great Depression, and there were virtually no opportunities for work in the west, let alone what Slim loved doing best – singing. As many young Canadians did, he climbed aboard an eastbound freight train, riding the rails as far as where he jumped off to find something to eat and a place to sleep. The Salvation Army’s hospitality and the generosity of Reginians have never been forgotten. A chap told Slim about a daily radio program on CKCK sponsored by the Army and Navy Department Store and suggested that he might be able to earn a buck or two if he could get to sing on it. Slim went to the store and somehow got to meet the owner – Sam Cohen. Mr. Cohen told Slim that he would have to see Bill Schultz who ran the program, but suggested that he might "tidy up" before he did. Slim was unshaven, his clothes were worn, torn and dirty from his travels and he was broke. Sam Cohen called to a clerk and said "dress this man".

Slim met Bill Schultz at CKCK and Bill gave him his first radio broadcast. Radio became the springboard that launched Slim’s career. No pay, mind you – but the opportunity to "sell" his talent over the air to the people of and to advertise his personal appearances and dances in the small towns throughout the province. He also produced and sold postcards with pictures of himself as did other performers – the proceeds often exceeding other earnings. After three years, in 1940 Slim moved to and struck up a similar relationship with CFQC. Soon he was working six mornings a week. From 1945-47, Slim returned to and sang on CJRM and then he and his Saskatoon-wed wife moved to BC, landing a morning show on CKNW. From this base, Slim began taking a show on the road, and in due course became a fixture at country fairs, stampedes and jamborees that went on for decades.

At 92 and still not in retirement, from his home in Surrey, British Columbia, Alberta Slim could look back on a lifetime career of singing, writing songs about Canada, and making records – a dozen albums no less for RCA --- most of which were transferred into a package of five CD’s.

He could well remember when he had his own circus, with a harmonica-playing elephant he named "Susie", trick horses, a blue donkey, singing dogs, a dancing bear and his own horse "Kitten", who told fortunes.

Jumping off that freight in in the dirty 30s was, for Alberta Slim, a fortuitous decision.