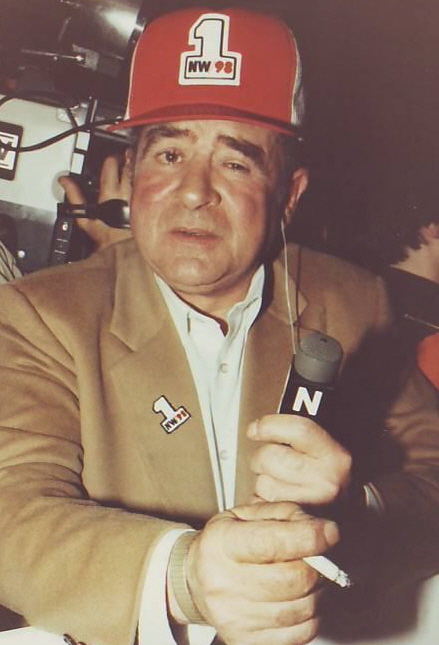 Thanks to the Sun for great reporting on Al Davidson over the years.

Broadcaster Al Davidson says he is fed up with rumors "rampant in the community" that he is about to be retired from the CKNW sports department.

He also said February 27/87 he has had enough smart remarks about his acquittal last year on arson charges and does not like people coming up to him with boxes of matches.

Davidson, known as Big Al, was interviewed after he went on the air at 6:35 this morning with an angry denunciation of rumors that he is on his way out. In an interview later, Davidson said he had met management and been reassured.

Station manager Ron Bremner was not available for comment, but CKNW program director Doug Rutherford said Davdison was told the rumors did not come from the station's management.

Davidson said one sports fan approached him during his broadcast after a recent Canucks hockey game and objected to Davidson's critical remarks about the Canucks.

If it had not been for a fast-moving radio engineer, the fan's comment - "Here's a box of matches, why don't you go and burn down the arena?" - would have been broadcast, Davidson said.

Davidson said he is happy to continue as a broadcaster without having to go to the many meetings "where they go in with a donkey and come out with a camel" that sports directors must attend.

Sports commentator Al Davidson was fired from radio station CKNW because he threatened the life of fellow sports broadcaster Neil Macrae, a court was told today.

Lawyer Erwin Nathanson, representing Davidson in a wrongful dismissal suit against the New Westminster-based station, said a festering dispute between Davidson and Macrae flared during a hockey game at the Pacific Coliseum.

According to Nathanson, Davidson said to Macrae: "My son is going to beat the - - - - out of you. When he finds you, he'll shoot your ass off. He'll bend you in half."

Nathanson said Macrae asked Davidson to give him a reason and the fiesty broadcaster replied: "I have 50."

Macrae: "Is that a threat?"

Nathanson said Davidson was fired in October, 1987, after Macrae reported the incident to CKNW management.

But the lawyer said Davidson, under financial pressure and wary of younger colleagues climbing the ladder, meant no harm to Macrae.

"The reports cannot be regarded as a threat to the life of Macrae.

"The entire incident was blown out of all proportion. It was made to sound as if the threat was made by Al Capone of ."

Davidson is suing for damages totalling $281,000 - representing the balance of his contract.

LET's get one thing straight; I never bought the proposition that you either loved Al Davidson or you hated him.

I loathed the broadcaster, but I loved the man. And if that's not confusing enough, I'm proud that I was asked to come back to this old location today to share some memories of the runty little pest and pal I knew for 25 years.

I hated the infuriating way Davidson practised broadcast journalism. He was biased, bigoted, vindictive and inaccurate. Put him in a chair in front of a microphone and he became as unpredictably dangerous as an exploding stove. And, God help me, I would get out of bed early to hear him commit all the foregoing sins. I felt he was a continual embarassment to journalism but I couldn't stop writing about him.

The perfect example of Davidson's ability to mix emotions is contained in the record vaults of the B. C. Supreme Court. Ruling on Davidson's wrongful dismissal suit against radio station CKNW, Supreme Court Justice Ian Donald described Davidson as "short-tempered, irrascibile, hypercritical and abrasive", and then ruled in his favor. And awarded Davidson $262,384 in damages. Do you love it? Davidson did, even though he didn't live long enough to collect.

That's strange, because he wasn't a good reporter and he diligently mangled facts without a second thought. On the fourth day after I had my 1980 heart attack, I was moved from the ICU to a general ward and at , three things happened at once that almost put me back in ICU. Two ladies arrived and eyed each other with hostility. My lunch arrived, my first solid food in four days. And on my bedside radio, I heard Davidson say, "Oh, there's sad news from 's. Denny Boyd has had a relapse."

What will people remember about this complex little man?

Ron Bremner, the former 'NW manager who fired Davidson, precipitating the law suit, says, "Most people never realized the kinds of things Al did behind the scenes for charity, always coming into the management offices to help the little guy. And I remember when I was on the street as a salesman hearing a guy say, "I can't stand that Davidson, never listen to him. Did you hear what he said yesterday . . ."'

I remember a moment of wonderful kindness. Joe Kapp, the old quarterback, had come back to town to speak at a sports dinner. He stayed too long at the bar and his speech was a rambling horror. Five hundred people sat frozen to their chairs, watching a hero destroy himself. Al Davidson walked up to the head table, put his arm around Kapp, said, 'Let's call it a night, Jody', and walked him to a chair.

I remember his self-deprecating sense of humor. He said on the air one morning that 42,000 tickets had been sold for a Supertramp performance and wasn't that a hell of a reaction for a Charlie Chaplin film revival.

Davidson covered sports the way a penitentiary guard covers prisoners, with a shotgun and a lot of suspicion. That got him into constant feuds. Davidson told me one night that B.C. Lions general manager, the even-tempered Bob Ackles, had, at a sports gathering, called Davidson "a bleeping little bleep." I asked Ackles if it was true and he said, "No. I called him a fat bleeping little bleep."

So what was to like about him? Al Davidson was a stand-up pal. He'd climb a mountain to help you. He wept easily. He loved his family. He knew what he was doing every minute of his most crazed broadcast. He was fun to be around.

Yesterday, Davidson's old colleague Gary Bannerman said goodbye to him on the air. He said, "It's just another stadium. Go grab the best seat in the press box. Good luck my friend."