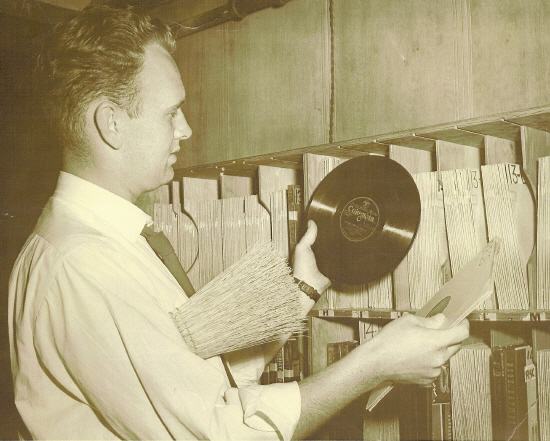 The Browne Family – 4 generations in Radio

“Local radio will always survive, as long as it provides people with local news and information, and continues in the tradition of people talking to people.”  Billy Browne Jr.

This is the philosophy of one family that has been committed to radio for four generations.  When Billy Browne senior began singing on CJCG in in 1922 he probably didn’t realize the impact his involvement with radio would have on generations to come.  A born performer, Billy Browne senior was involved as a child in circus acts, in the military as a drummer and bugler, and throughout his life he was known for his wonderful singing voice.

After leaving the military, where he was decorated twice, Billy senior vacationed to in 1928 and never returned, often joking that he was “still on vacation.”  Known as “the Grand old man of Canadian radio” and the “Chief Disher-upper,” he hosted famous shows like “Billy Browne’s Brevities”, “Remember When”, and “Breakfast with Browne.”  He was manager of CKMO Vancouver for 6 years before moving on to CJOR where he took over the morning show.

Beginning in 1945 “Breakfast with Browne” claimed 100,000 loyal listeners who also enjoyed hearing Browne’s son Billy Browne Jr. literally grow up on the air.  Billy Jr. watched his father on air and spent much of his time at the radio station.  He often went with his father on sales calls, and to station events.

After a stint in the Navy, Billy Browne Jr. returned to his passion for the broadcast industry and became known on air as “Billy Fortune.” When Billy Browne Sr. passed away from a heart attack in 1951 at age 55, it was the natural thing for Billy Jr. to take over “Breakfast with Browne.”

Billy Browne’s “Breakfast Club” was widely popular and offered listeners a membership card and a chance to win money.  It was rumored to have had the largest membership of any radio club in North American history.  The Breakfast Club was so popular in fact it continued long after Billy’s death up until 2005.

Everything was going right for Billy Jr.  He met a wonderful woman named Norma and fallen very much in love.  He married, had a daughter named Charleen, and a wonderful career as one of the highest paid disc jockeys of the day.  That is why his next move was considered so crazy by so many of his peers.  Billy and Norma decided to open their own radio station on .  As Norma once told reporters “we had been [going there] as often as we could on weekends and holidays for fishing.  We always hated to leave, so we decided to do something about it.”  And they definitely did.

CFCP, based out of the , went on the air in 1959 and it was Norma and Billy’s goal to have a community focus for their station.  This included, lost dogs, items for sale in a show they called “Telemarket,” and even a program called “Message Time,” where listeners could pass along a message to someone they knew.  All of these hit the community focus nail on the head.  Billy Browne Jr. managed the station while continuing to run “Breakfast with Browne” every morning.  Known for his vast record collection and his talent for reading poetry on the air, Billy was as much a star on as he had been in .   No matter what the weather, listeners were greeted with the words, “It’s a beautiful morning.” It was an exciting thing for a small community to have a radio station they could call their own.  Norma dealt with accounts and administration and together, as Norma would say, “simply put, we made a wonderful team.”

Throughout the years their daughter Charleen has had different levels of involvement with the company but has always maintained a passion for radio.  Charleen worked administration and other jobs but was primarily focusing on becoming a registered nurse.  It was actually at CFCP where she would meet her future husband.  Greg Phelps was hired by Bob McGinnis as a newsman for CFWB in 1974.

In 1977 Charleen and Greg were married.  In 1982 they had a baby boy named Ryan who was the apple of Billy’s eye.  True to tradition, Billy loved having Ryan on the air with his “Papa,” singing songs, telling stories, or just chattering away.

In 1985 Charleen and Greg had a daughter named Christen, affectionately termed “Roo” by Billy himself.  Like Charleen and Billy, Ryan and Roo grew up surrounded by radio on a day to day basis.  Billy’s longtime employee Gail Holdway recalls “he was always fawning over the kids and wiping Roo’s runny nose.  The kids were always in the hallways.”

In 1990 at the age of 63 Billy Browne Jr. suffered an aneurysm and passed away at home.  His funeral was a mix of all kinds of people.  Dick Drew delivered the eulogy to mourners dressed in everything from Native Garb, to thousand dollar suits.  After his death, Norma took over as C.E.O. and continued to run the business.  Shortly after that her son-in-law Greg, who at this time had now done everything from news to car sales and print media to management, took over as the General Manager.

From 1992-1994 Charleen followed in her fathers footsteps and hosted her own show called “People to People” based on her fathers belief that radio was all about “people talking to people.”  Greg took over some of the morning show duties and was often called “the Voice of the Valley.”  As well as running parts of the morning show Greg was involved in sales and programming.

In 1999 on New Years day Greg needed someone to fill a shift, and it seemed his only option was Roo.  His son Ryan was at UBC pursuing his love of music and studying to be a teacher.

Since that first day Roo went on the air her passion for radio has grown and grown.  At the age of 19 she was hired as the first female morning host at CHQB 1280 am in .  Roo takes great pride in following in her families footsteps.  She is considered the only known 4th generation broadcaster, in a continued line, in .

In 2005 Norma made the decision to sell the company and retire.  Both Greg and Roo stayed on with the new owners for 8 months and then chose to pursue other endeavors.  Norma is happily retired.  Charleen is a mental health nurse in the and also avidly follows the love of story telling she learned from her father, as a writer.  Greg has chosen a very exciting endeavor working for Habitat for Humanity, and Roo jumped at the opportunity to work for the Jim Pattison Broadcast group in .

Radio has shaped the lives of these four generations.  It has been a part of their past, and Roo hopes her passion for broadcasting, will secure it as a part of their future.

1.    Side two of a Breakfast with Browne card

2.    Side one of a Breakfast with Browne card

3.    Side one of an older Breakfast with Browne card